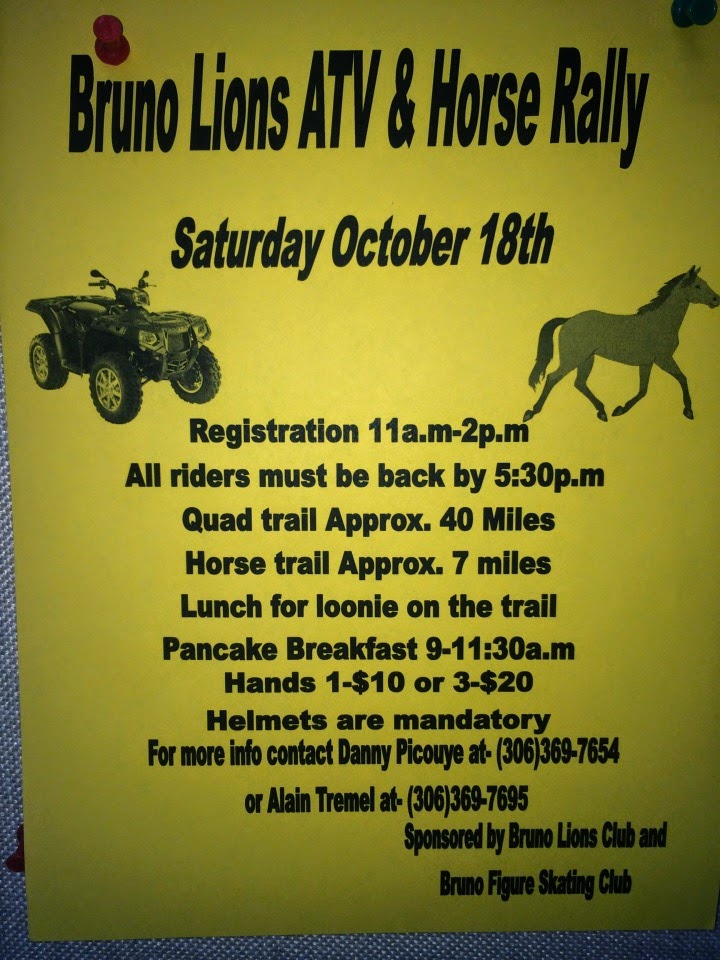 The trees were starting to lose their leaves, farmers had finished combining, and there was a crispness in the air. No doubt about it, fall was here and snow would be coming soon. I continue ATVing well into December but the writing was on the wall that for the majority of riders the season was over. But wait, we need to get in one more really good ride. And that was when I heard about the Bruno ATV Rally and decided to do some research on it. Information was hard to come by, some said it was just riding across stubble fields and gravel roads, others said it was a good time. I decided to take my chances and got a group together to check it out.

As mentioned, it was a bit later in the year, October 18th to be exact but thankfully the weather was cooperating. It wasn't hot by any means, but with chest waders and a waterproof jacket it was just right. Our crew met on the outskirts of Saskatoon and traveled as a group to Bruno. Total distance is only 91kms, so we were there in less than an hour. This is the closest ATV rally to Saskatoon and the short drive was an absolute bonus.


My GoPro video of the rally

We arrived around 10:00, which allowed us time to have a nice pancake breakfast before heading out. I would estimate that there were already around 200 machines and riders at various points of unloading, getting ready and having breakfast. Breakfast was served in a small rec center and it was crowded. We started by purchasing our poker hands, getting some tickets for the door prizes and 50/50 draw. The atmosphere was pretty relaxed, lots of socializing  going on and nobody seemed to be in a huge rush to get out.

This was only my second ATV rally, and there were some very stark differences between Bruno and the other rally I attended in spring (Foxford). One of the main differences was that there was more family involvement in Bruno. I saw a fair number of kids, some riding with parents, others with grandparents.

Another difference was the rural feel of the rally. You could tell this event was a huge draw from all of the surrounding areas. Many of the machines I saw looked like they had just been loaded up from the farm and brought over. Lots of stock Honda's and Yamaha's and some machines that looked like they were held together with chicken wire and duct tape.


Another contrast to Foxford was that snorkeled mud machines were in the minority.

We loaded up out machines and hit the....er trails? Yeah no trails here, you are riding cross country from field to field, your only guidance is stakes in the ground with orange tape spaced about a quarter mile apart. For the most part we found our way pretty easily, but there was the odd time that we got off the path and had to search for that next stake.
Fields were combined, so there was nothing but stubble on the ground. It was fun to bomb through the fields at high speeds for a bit, but we wanted mud.
We came across our first slough and played around in the mud, I was worried that would be the only one but boy was I wrong. It seemed like every quarter mile there was another mud hole. Around some of the mud holes there would be a group gathered, many of them socializing among themselves and being entertained by the other guys get muddy.

We played in that first mud hole no less than half an hour, we were all in our glory. We had one guy riding in our group who had no fear,  as soon as we got to a new mud hole he would go ripping right into the center without knowing how deep it was. To our amazement he never swamped. The next mud hole was just about as much fun...and they kept on coming.

That was pretty much how things went, mud hole to mud hole with stubble field in between. Some areas were actually quite hilly and not your typical flat prairie. I was constantly amazed at just how many machines I saw, they were everywhere, you were never completely alone.
I ended up blowing a belt just before the check point and ended up having to get towed in. They were selling hotdogs so we grabbed a bite and did a quick belt swap. Again there were a ton of machines and people, I would guess around 200 ATV's a the half way point alone.

Thankfully the check point was a little more than half way, because I was running low on fuel. We were started to get tired and blowing a belt took some of  wind out of my sails, I was less inclined to hit every mud hole we passed.


We pulled into Bruno around 5:00, I can honestly say I was exhausted and completely covered head to toe in mud. The towns volunteer fire department was set up and for $10 they would spray down your quad with the fire hose. I was more than willing to leave as much Bruno mud in Bruno as I could. I knew that no matter how much they cleaned my machine I would still have a couple hours of de-weeding and cleaning at home but it helped.
We loaded our machines, had some burgers and fries at the same facility we had breakfast, and called it a day.


Crazy fun! What an enjoyable day, played hard, had some breakage but nothing major, had an awesome group of guys I was riding with. Couldn't have asked for more. The Bruno Lions club did a great job of organizing and put on a great event. If you are one of the landowners that allows the rally to cross your land, thank you.

I did have a couple concerns; one was the amount of alcohol being consumed and drunk drivers\riders, the other was seeing a number of people without helmets. These issues plague pretty much every event of this sort.

If your looking for nice tight technical trails, probably not the best rally for you. If you enjoy bombing across stubble fields and socializing with friends and enjoy getting muddy, then absolutely Bruno is the place for you. Looking forward to 2015.