It's about time that I give my report on the Tiger Tail that I received from the boys at Team Tech Engineering back in the early parts of summer. Many of you have heard of these as they have been talked about quite a bit, but for those of you who have not let me fill you in on what it is. To make it very simple, it is a retractable tow rope that attaches to a hitch on your ATV. The retractable part serves two functions, one is that it is easy to pull out and put away, the other is that you don't have to worry about running over the line and getting it twisted up in you axles as there is never any slack on the rope.
There is another version of the Tiger Tail made by KFI, which to my understanding bought the manufacturer of Tiger Tail and retails it under their own brand. The products are identical other than color.

First impressions were that the product looks good and rugged spoiled only by plastic cap which presumably covers the spring retractor. This cap does not have the same rugged look as the rest of the product. 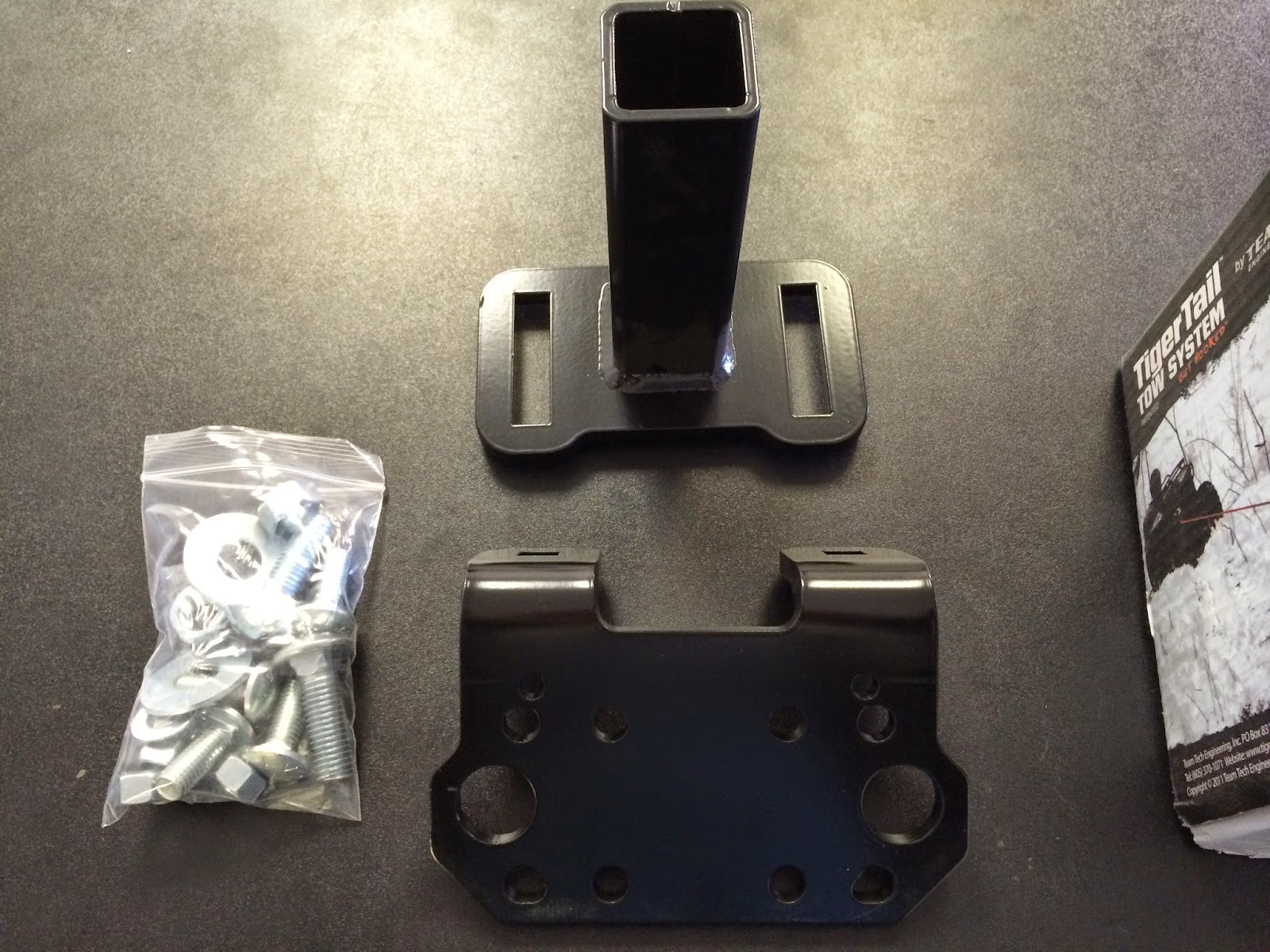 Price is a big factor in purchasing the Tiger Tail for most and I will get into that more later but one of the things that causes the price to be as high as it is, is the mount. Pictured here the mount is in two pieces, all three are then bolted together. The mount is heavy, very rugged thick still with big carriage bolts. This assembly, once built to fit your machine stays together in one piece and easily slides in and out of your hitch receiver, held in by a hitch pin. 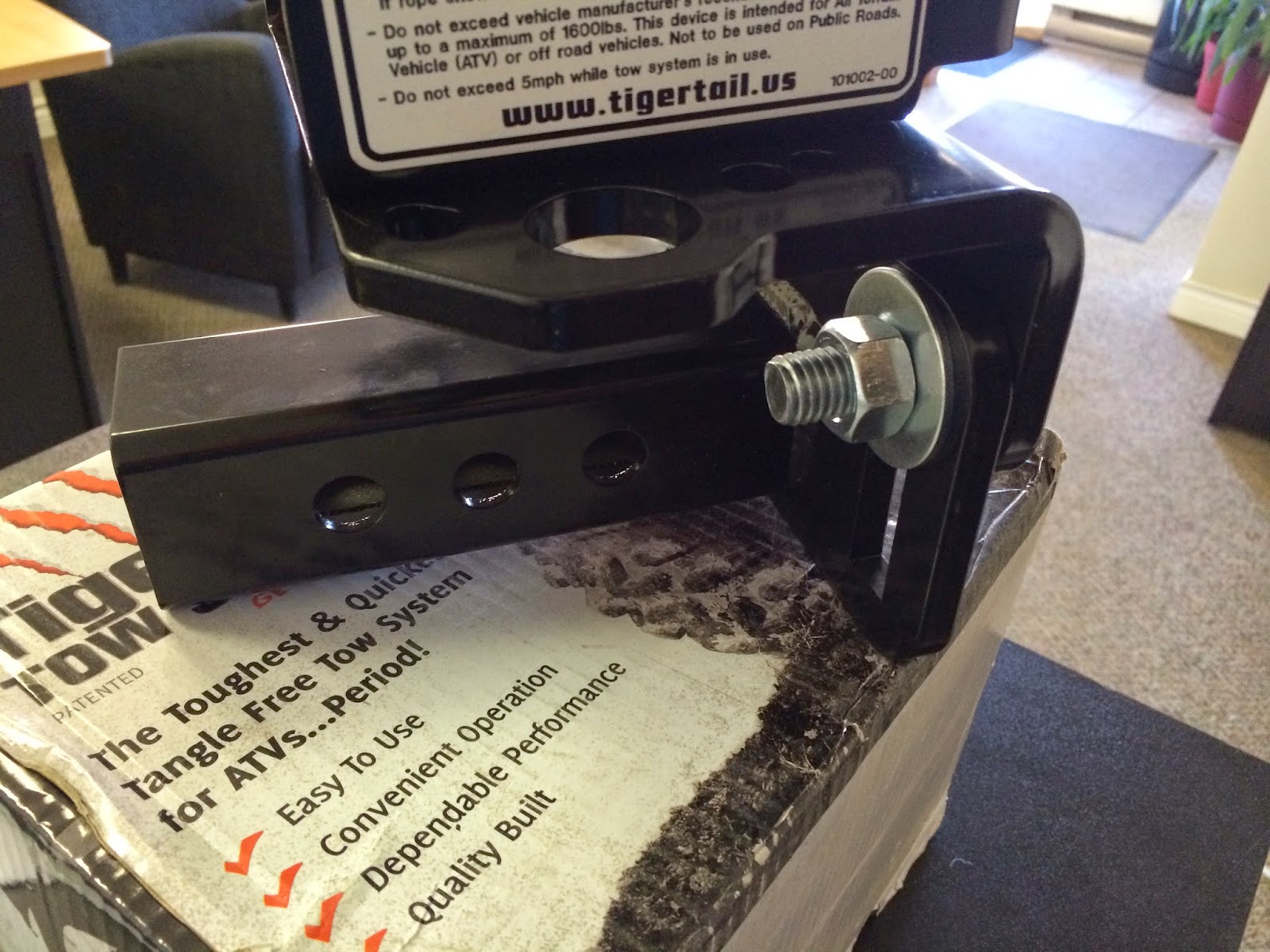 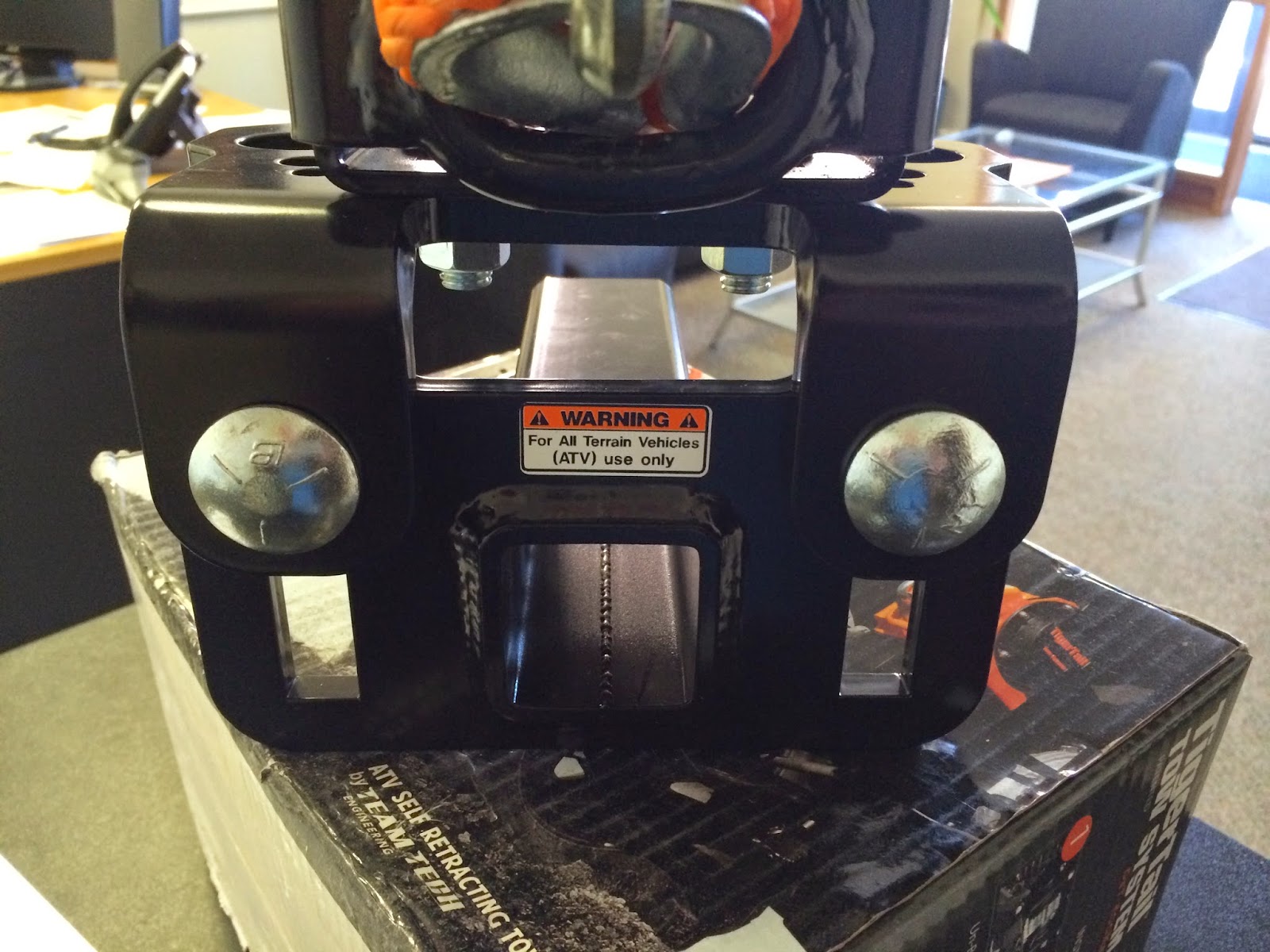 Even though it may look like you can still use the hitch I can tell you right now that you can't. 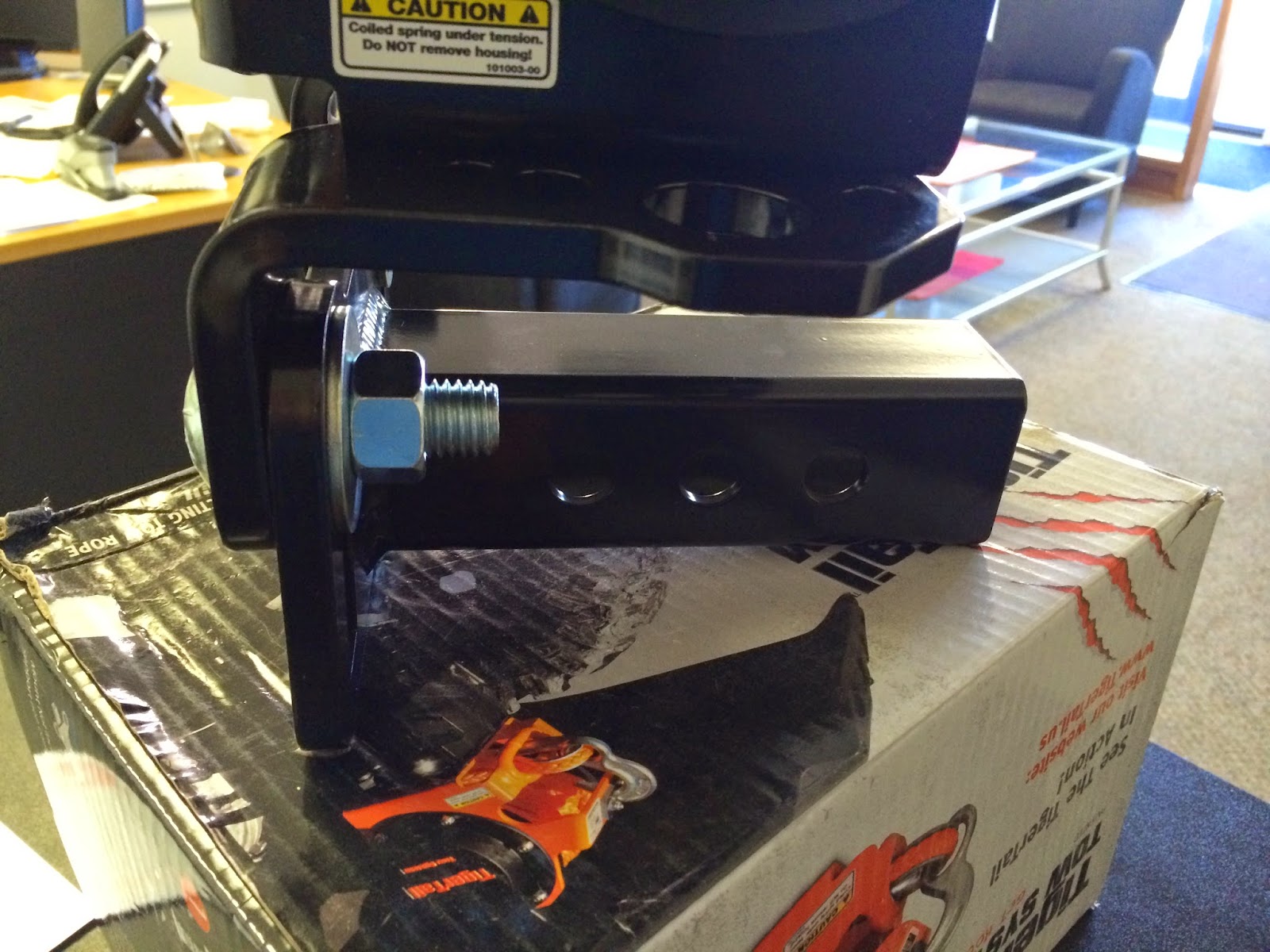 If your machine already has a hitch receiver you are lucky and this will reduce your cost substantially. My Renegade did not come with one and therefore I need to buy and install one before I could use it. 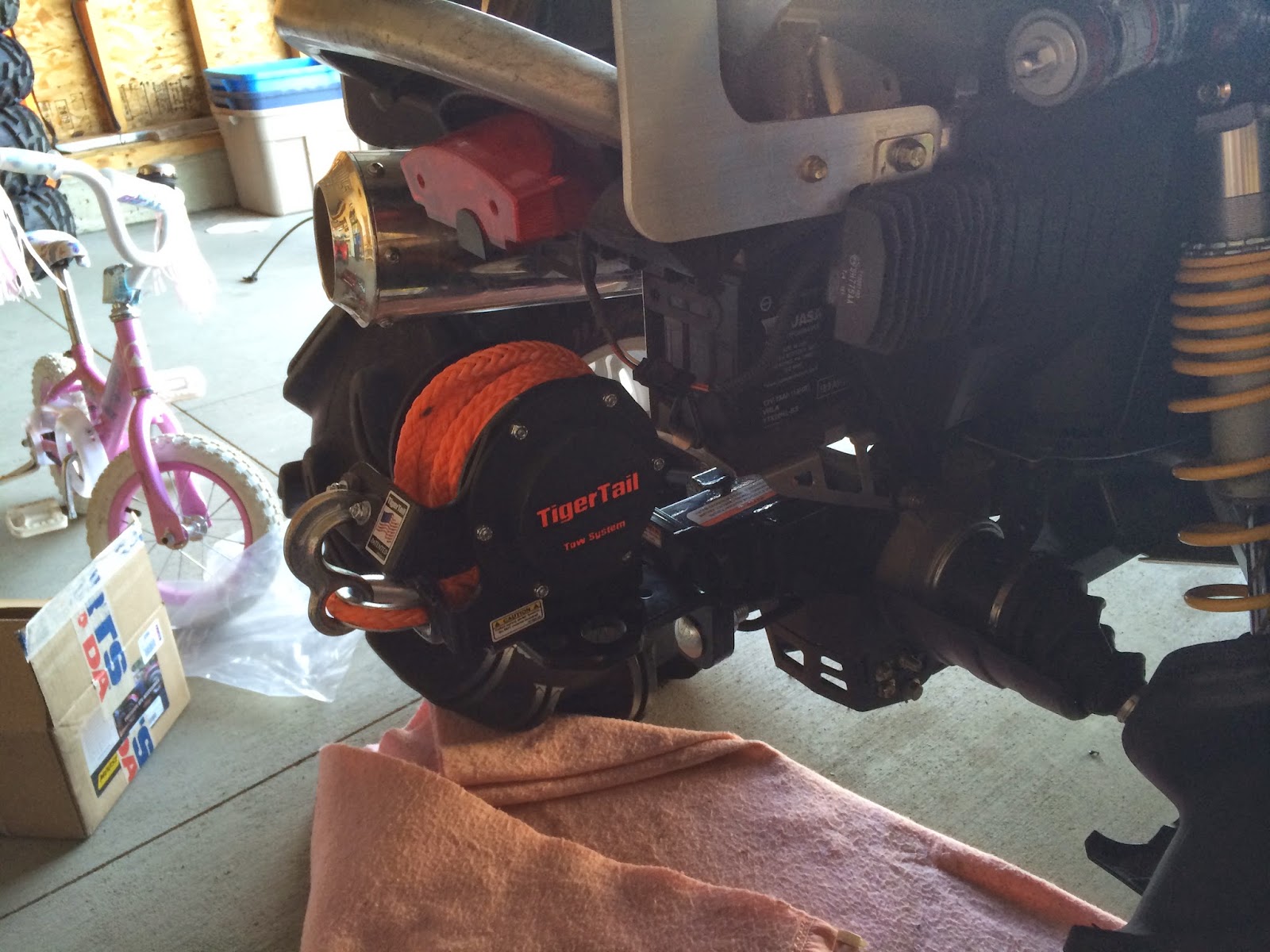 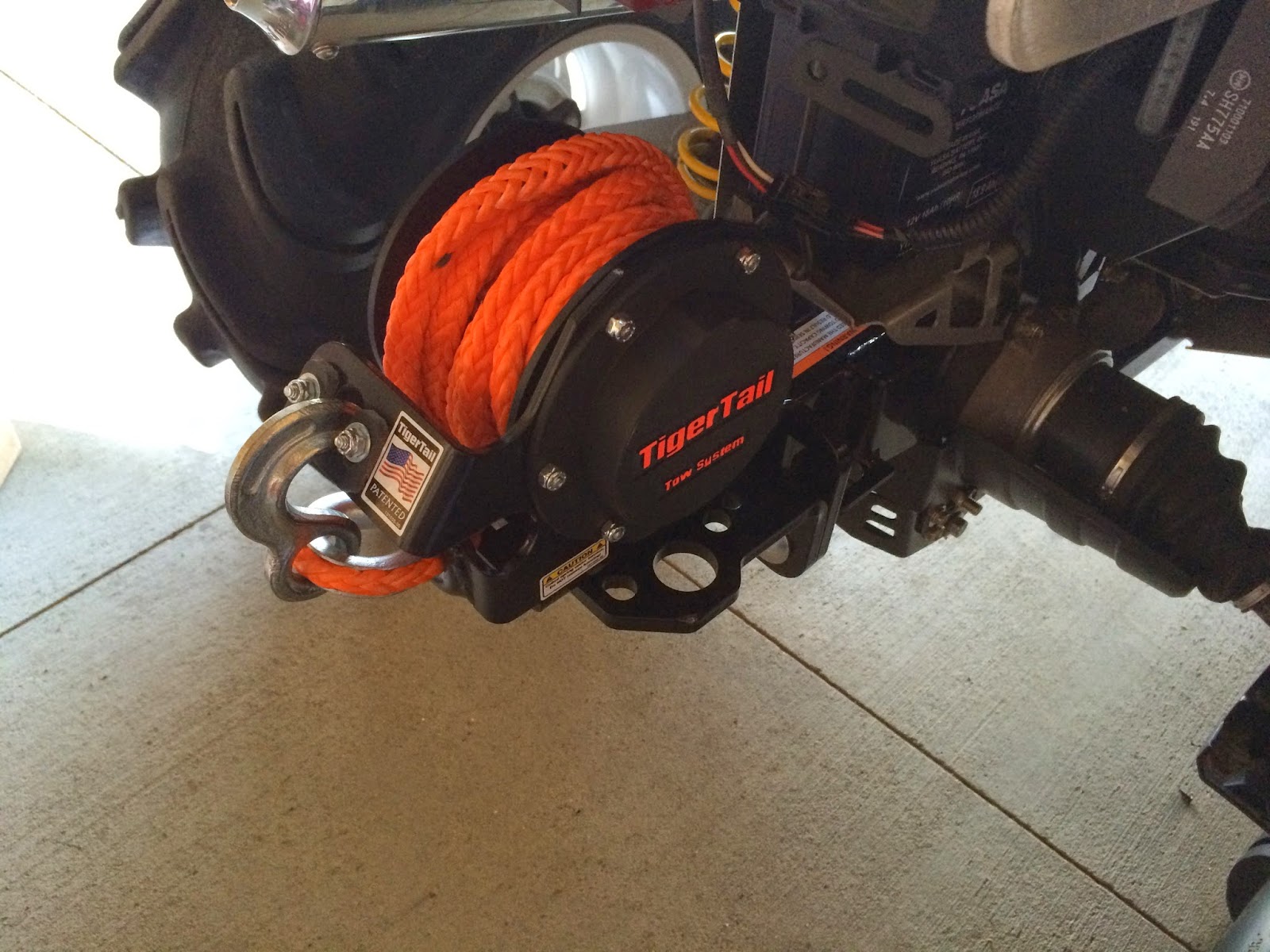 This is just a picky thing that my OCD would like changed, but because of where the rope attaches to the spool it is impossible to get the rope to wind nicely on the spool. Purely cosmetic and picky. 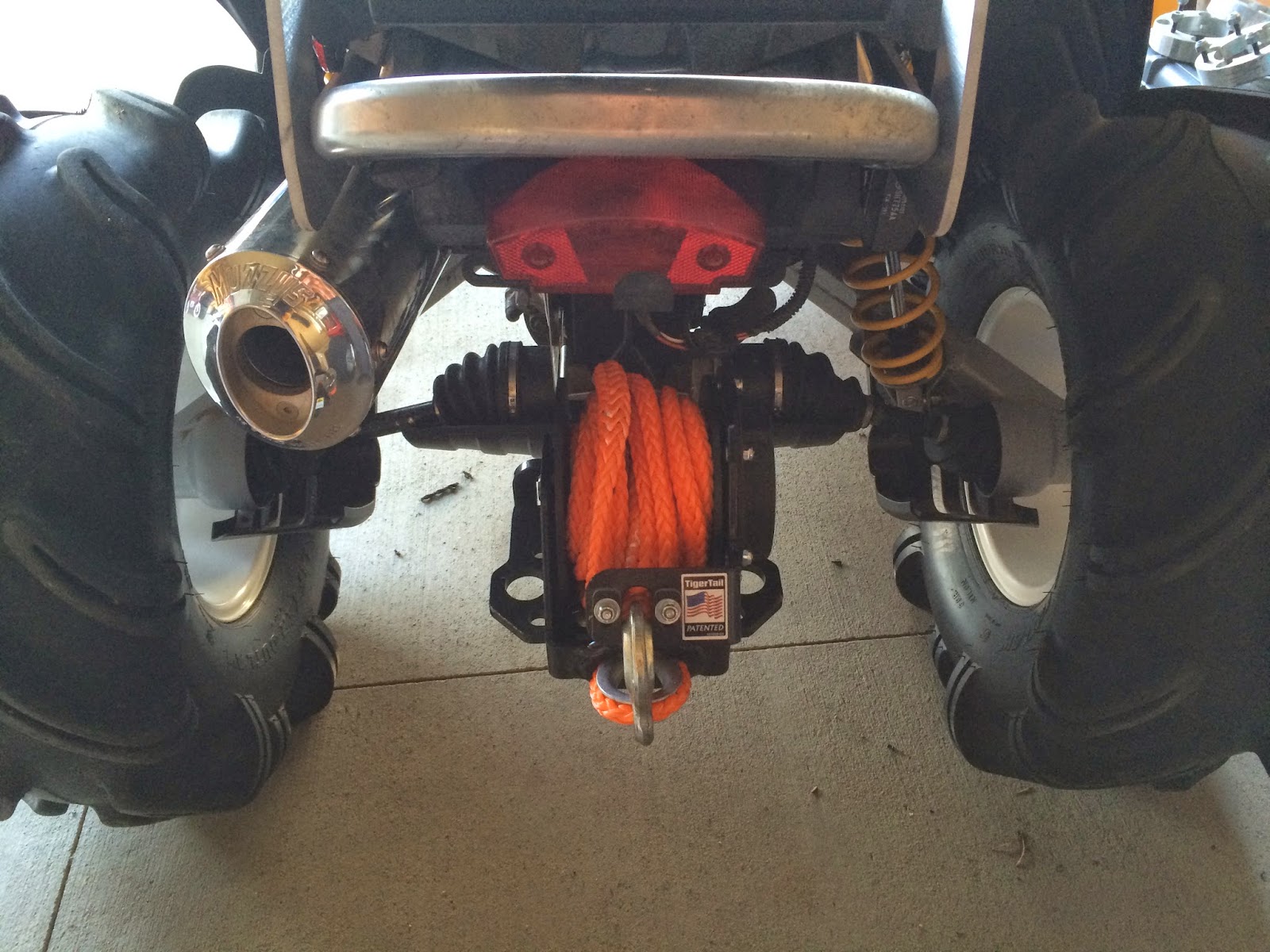 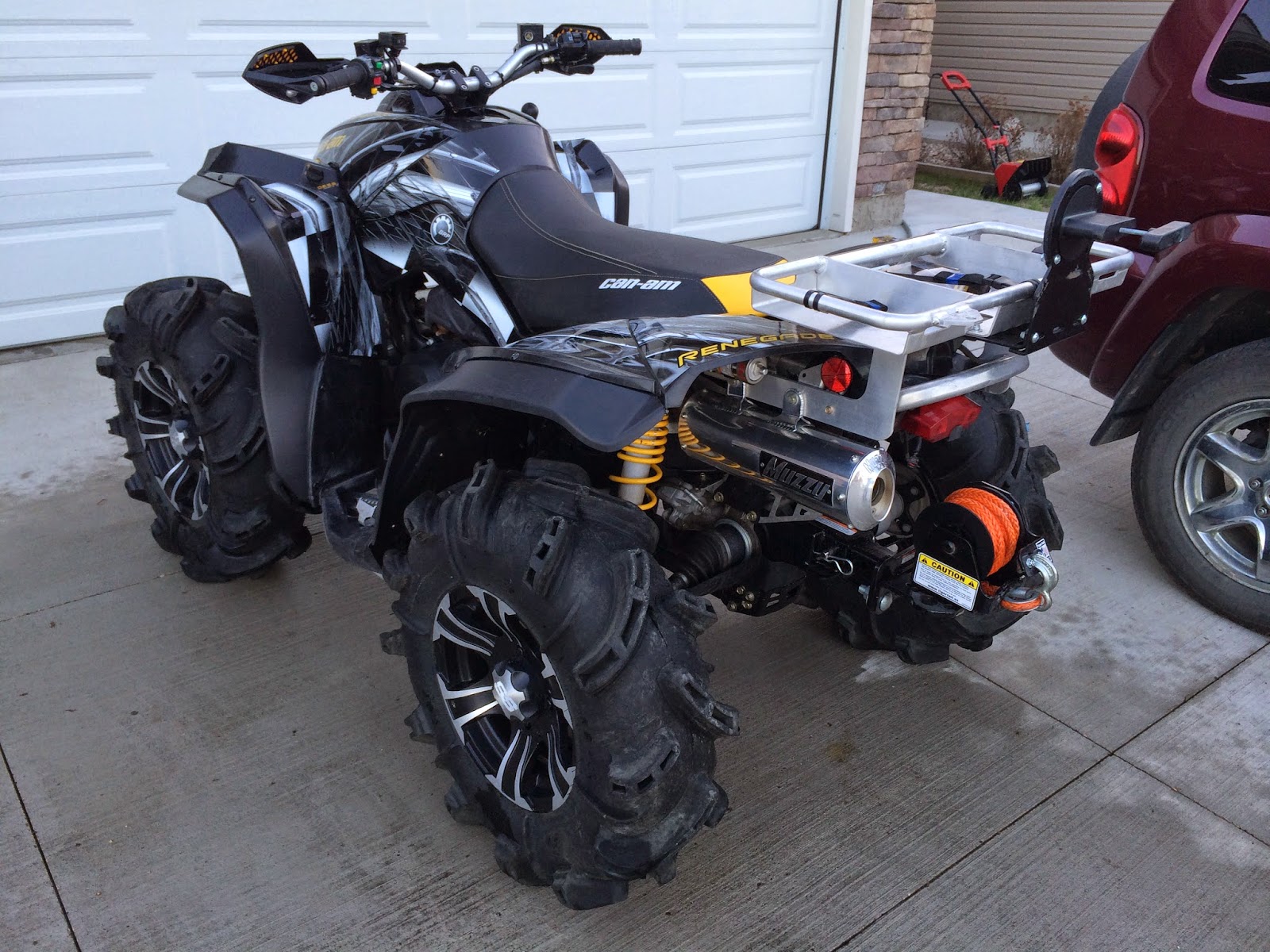 I had mixed reactions to the final result. As much as I liked the functionality the Tiger Tail would give me I thought it made my machine look funny, rear end looked bulk and the florescent orange made it so your eyes couldn't miss it. I also felt like it somewhat made my Renegade look like a tow truck. 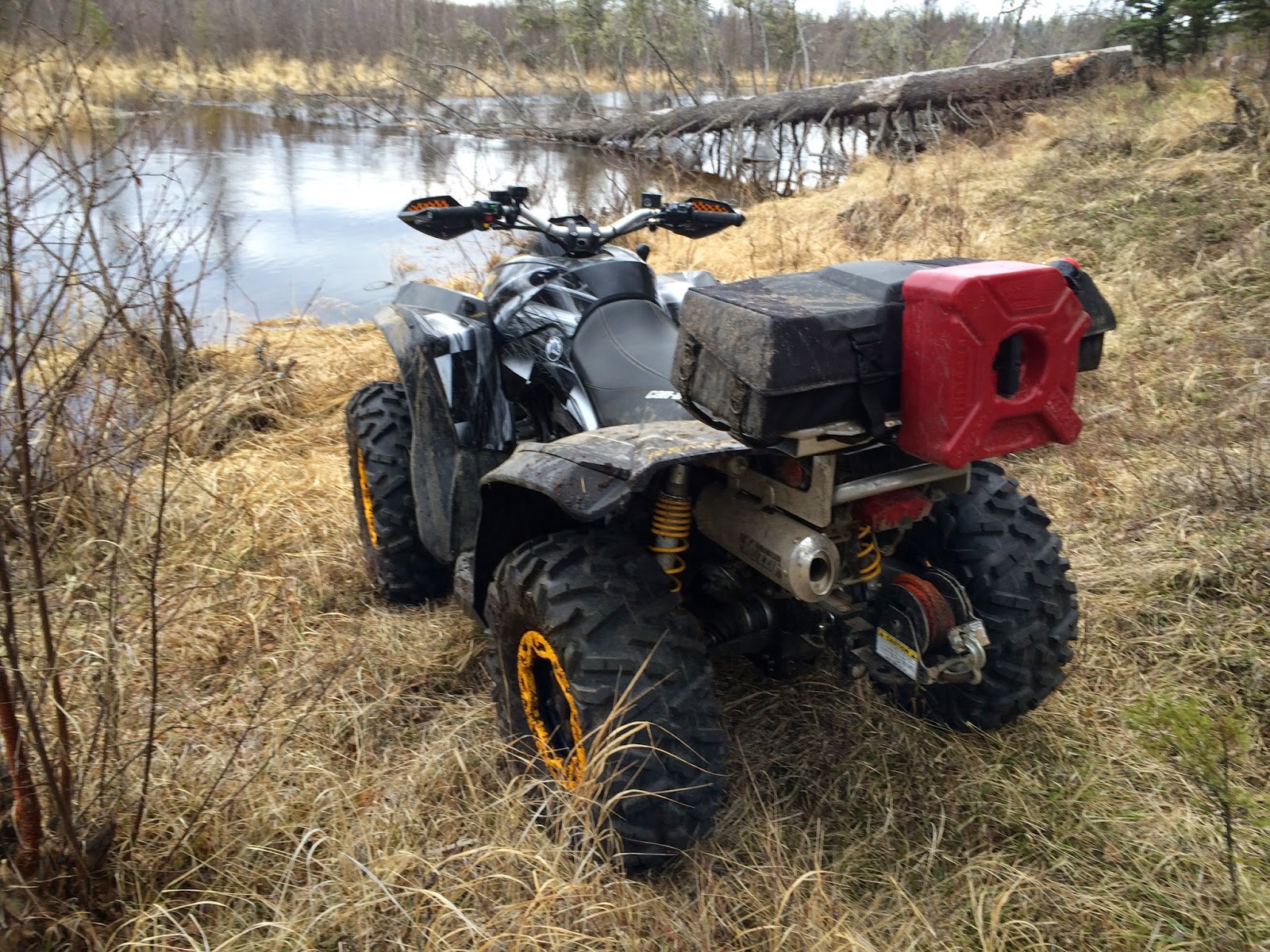 Once dirty it was nowhere near as noticeable. If that is a factor for you you may want to buy the KFI version as it comes already black.

So what about using it?

I will tell you that this product performs exactly as promised. That being said, I didn't use it as much as I thought I would. Your going to use the Tiger Tail either to pull yourself out, or someone else.For pulling out a buddy it works great, just like the video you back in, hook up, pull out and retract. So fast and simple. For getting unstuck I am less likely to use it when given the option between it an my winch. My winch is slow and controlled and I like that, especially when you see the gumbo I get stuck in. The other factor is that you need a buddy to pull you out (which mean you have to suck up your pride and say "hey, I need help") where as you are still independent with your winch...even though it will take you at least 10 time as long to get unstuck.

When I first introduced the product to my group I was amazed at how critical many were without knowing much about the product. One of the main criticisms was that the recoil mechanism would break. I am happy to report that after many tugs and submerging the until in water repeatedly as well as being covered in mud, it has never had even the slightest issue recoiling.

When I was at camp I used it along with my tree save to yank deadfall out of the bush and it worked great. Very strong, I never worried for a minute that the rope would pull off the spool. 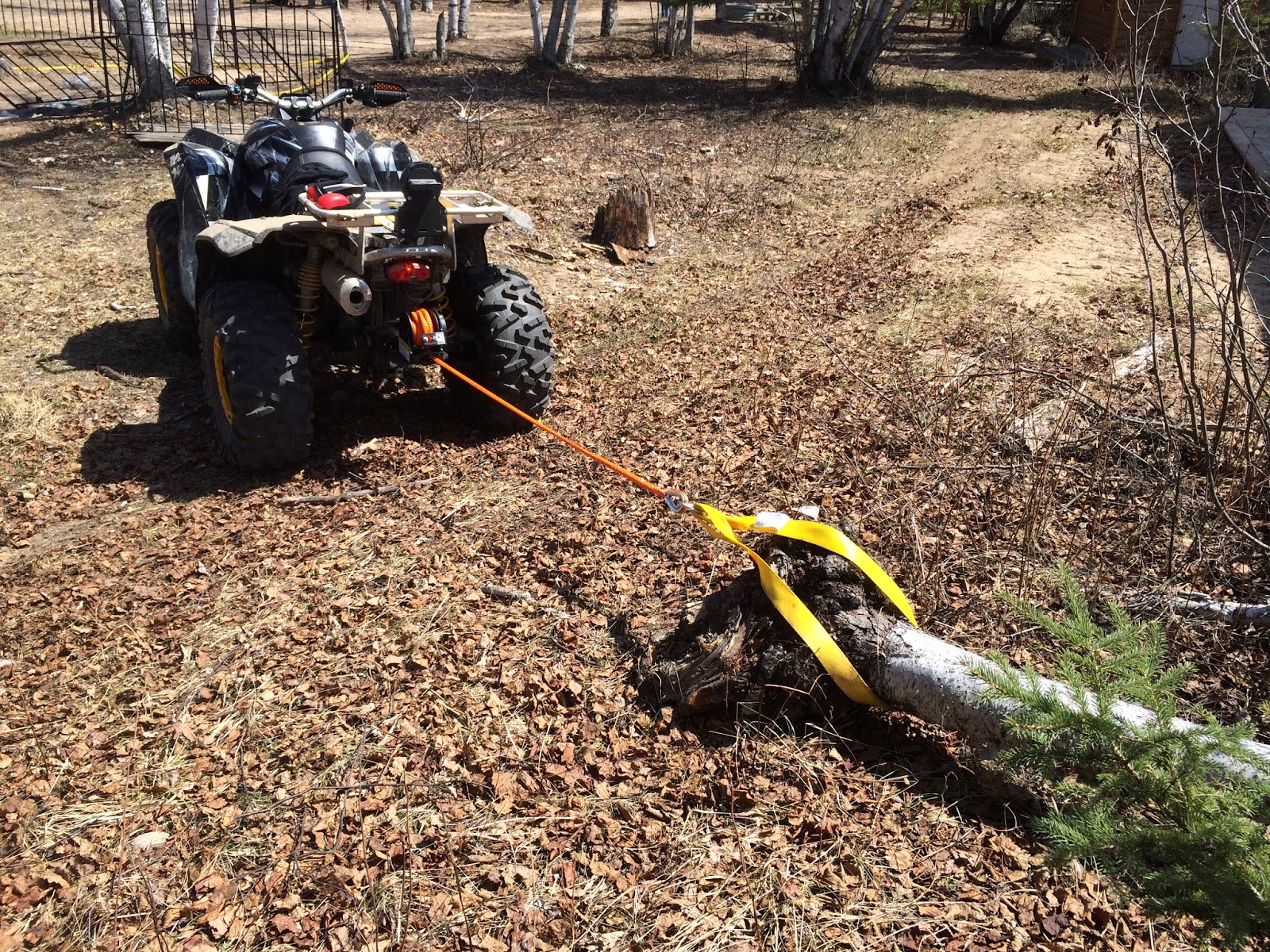 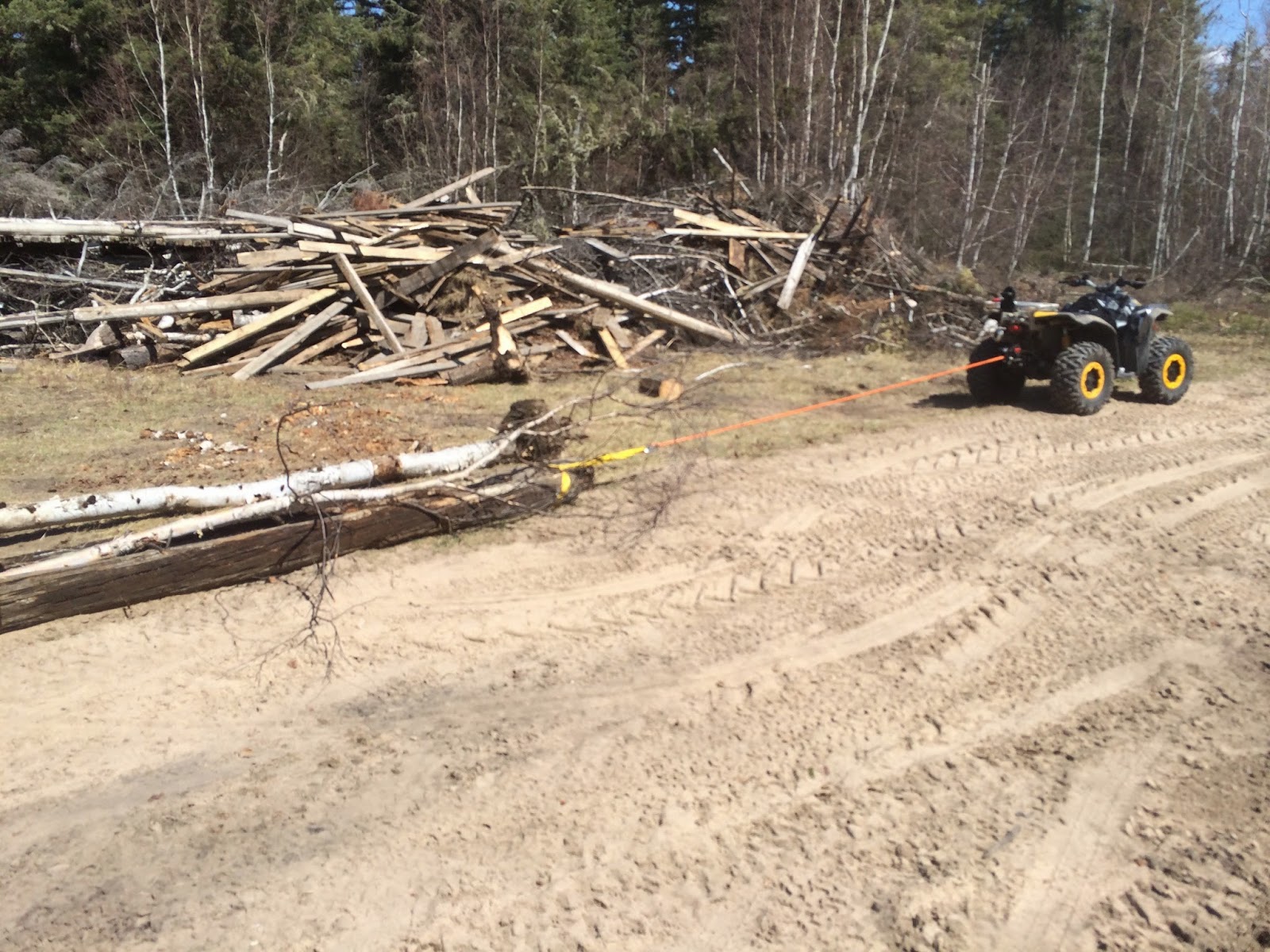 This is the biggest reason most people will not buy it. The Tiger Tail and the mount retail for $230 USD when buying directly from their website (http://tigertail.us/), add shipping, duty and conversion you are looking near $350. I believe the shops around my area are retailing the KFI version for $299. There are not many people I know that will pay $300 for a tow rope...even if it looks cool and and is super convenient to use. I had to add a hitch receiver to my quad which jacked the price up another $150.

Quality construction, heavy built, professionally marketed. Works every bit as well as promised. Great product, I will continue to use my Tiger Tail for many years to come. Team Tech Engineering was kind enough to give me special pricing on the unit so my investment is lower than what the average person who buys this will be. I am not sure I would have spent $300 on it.