The incredible excitement of finding a deal on Kijiji is addicting, and it keeps me checking the ATV section at least a couple times a day. Lately the deals have been few and far between.

But I got some excitement a couple weeks ago in the form of an ad simply titled "Two quads and two trikes". The first time I saw the ad I passed it by,  but it was the second pass that made me take a double take as I recognized the silhouette of one of the three wheelers in the thumbnail. Sure enough it was a Honda 250R.
Three wheelers are a part of my riding past. When I was 15, my Dad bought me a 1983 Honda 250R. I had many rides on that machine with my friends and to say it has sentimental meaning to me would be an understatement.


Click here to see my article on Three Wheelers

The seller on Kijiji was asking $900 for all four machines, I was quite sure that the 250R was worth nearly that amount alone. So I missed the meeting I was supposed to attend that evening so I could rush out to Osler SK and snag this deal. The other ATV's in the package were a Yamaha Moto4, a kids Gio 50 and an ATC 110. None of which interested me, my hope was that there would be enough value in the other machines that I could sell them and have a near $0 investment in the 250R.

Even though it was still early in evening here in Saskatchewan, I couldn't see much because it was pitch dark, winter is coming soon. This would be a quick purchase, no time to study each one and evaluate. Basically just pay, load and go. I managed to get the seller down $50 to $850 for the package even though he was getting multiple texts and emails from other interested parties even while we loaded the machines into my truck. 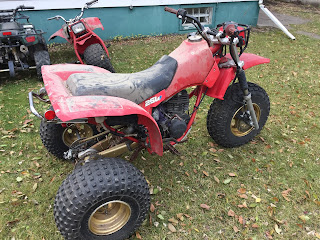 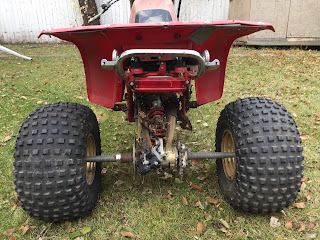 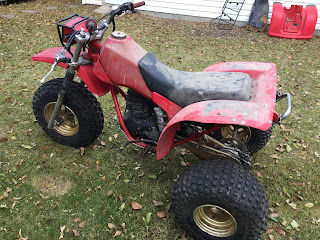 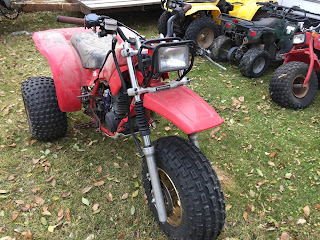 It wasn't until the next morning that I could unload my purchase and find out what I actually got. The Moto4 was decent, but needing an engine rebuild dropped it's value substantially. It was mostly complete and in good condition but missing it's seat. The Gio 50 was a typical cheap chinese turd, and although complete didn't have much value. The ATC 110 was in very poor shape, missing the rear axle and the fenders and seat were beyond repair. Generally disappointing.

The 250R on the other hand, was better than I expected. It was complete but needed an engine rebuild and some TLC. It was everything I had hoped it would be, I'm just not sure if I have the time or money to rebuild it. I would love to ride one again, these machines are insane. So much power and torque, you can barely keep the front end on the ground, but also dangerous.

Nostalgia is cruel, it muddies the waters and takes the wisdom out of decisions. To start the rebuild on this machine could quickly exceed it's value if the bottom end of the engine needs a rebuild as well as the top.

The seller also included a bunch of parts for a 250R in the package purchase.

He likely thought that he could use these parts for rebuilding the 1984, but unfortunately there are very little parts that can be exchanged between the different generation trikes. But I was more than willing to take them, if nothing else they would be good for resale. The seller texted me the next day and mentioned that he thinks that the guy he got these parts from may have the rest of the 250R on his farm and gave me his number. This was intriguing, but should I spend more money?

I decided to contact him and said he was willing to let it go for $100. I figured that it was a good investment because it would increase the value of my parts and I would have a second nearly complete 250R.

So here is the current tally on my investment:

Currently I am trying to sell the 1982 250R and I am looking into finding someone to rebuild my 1984 250R. I will update this page in the coming weeks.

UPDATE
I decided that I didn't have the time or energy to pursue a nostalgic project like this and sold the entire lot. Shortly after selling everything I found a great deal on a 2010 Can Am Renegade 800 which requires some TLC and am pursuing that instead. More to come on that project soon.