I consider myself very fortunate to be able to have owned a number of different Can Am's since purchasing my first in 2012. To this point I have owned two Renegades and the XMR I am reviewing here. My swapping machines every season or so has nothing to do with a dislike of any particular machine but more about an appreication for different models and a desire to try them out.

My purchase of my 2011 XMR was more opportunity than it was a desire to change machines, but there were a couple of deficiencies that I felt the Renegade had (see my Outlander vs Renegade write up) that helped me make the switch.


Are you interested in learning more about the history of the Outlander and Can Am? Click here!

Saskatchewan is mud country, and the XMR is pretty famous around here. I immediately fell in love with the stance of the machine when I first saw it in the showroom. To think that a company would actually build a mud specific machine blew my mind at the time, coming from a Honda background that builds almost exclusively for utility.


Here are the features that make the XMR an XMR:

-Factory radiator relocate - This feature keeps the radiator up and out of the mud giving the XMR better protection from overheating due to a clogged rad.

-Factory mud tires - Depending on what year and model it came from the factory with either 30" Gorilla Silverback tires or 28" Maxxis Mudzilla's. Some models also came with 14" SS aluminum wheels.


-ACS - Air Controlled Suspension was an industry first. The longer chassis allowed space for an air compressor to be fitted onboard, and with the touch of a button you could raise and lower the suspension which dramatically affected the ride height. This feature was dropped on the most recent models due to reliability issues.

-Water wheelie pegs - When your front end is up in the air, these special foot pegs or boards give the rider a more comfortable place to put your feet.


-Longer chassis - Not all models of the XMR used the Max chassis but most did. This increased the wheelbase by 8". The theory being that longer ATV's do better in the mud. As it was built on the Max chassis, XMR owners could purchase a passenger seat and turn their XMR into a 2up machine.

There are likely other features that I have not mentioned but this covers the major ones. 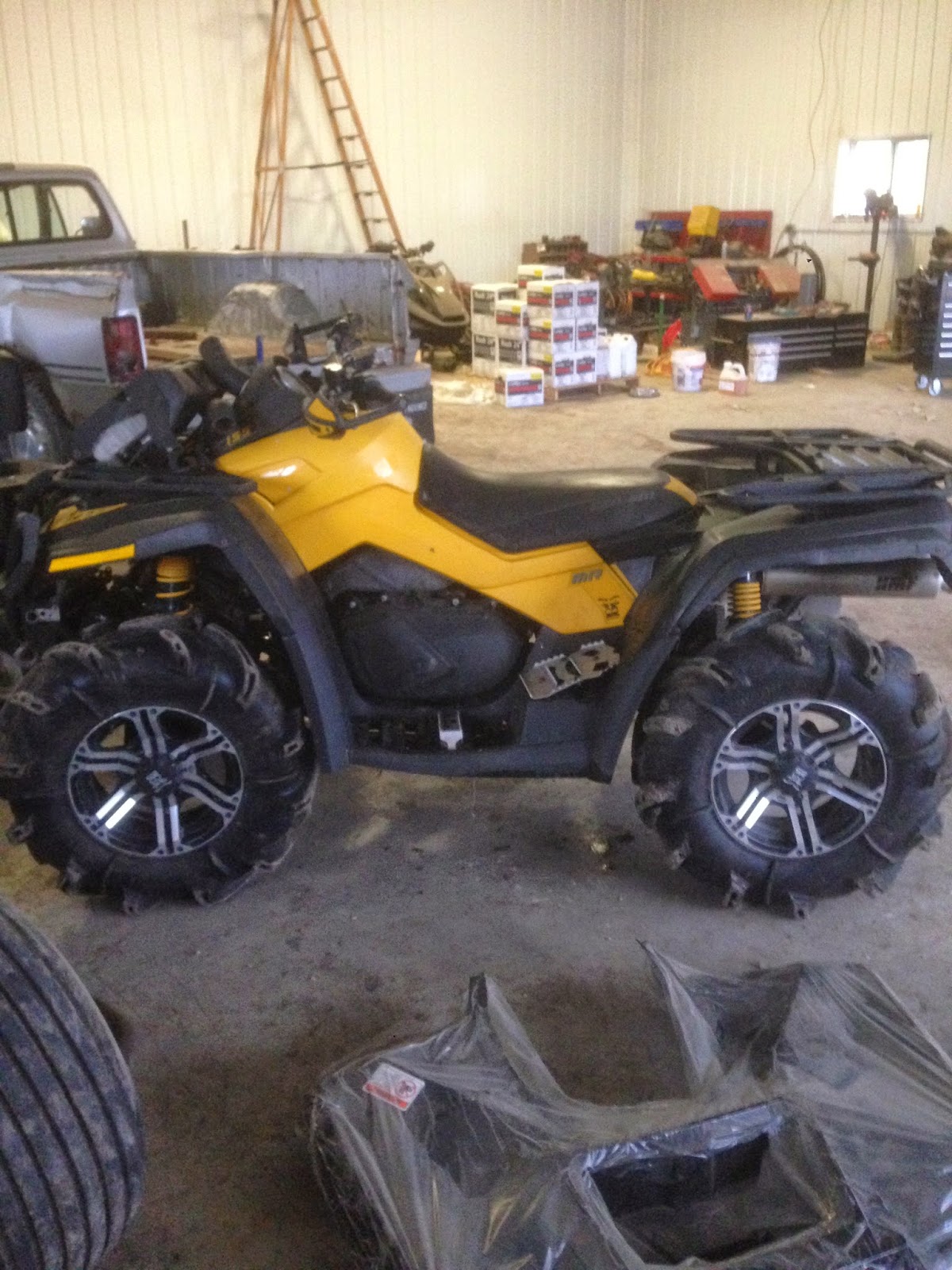 My XMR came to me a bit unkempt. The previous owner had not kept it up but thankfully it was all good mechanically. Most of the repairs I did were cosmetic. The first of which was removing the plastics and cleaning out years of caked on mud from various areas in the chassis and suspension. The snorkels had fallen apart and also needed attention.


I put 200 miles on this machine from mid summer to the writing of this article and I have nothing negative to say about it. It has worked flawlessly for me other than some clutch issues that are more likely the fault of the aftermarket primary clutch than that of the machine. That being said, the longer wheelbase does have it's drawbacks.

As much as I knew my riding style would have to change, I didn't know by how much. I knew that wheelies, power slides and doughnuts would be limited but I was surprised by how much. One of my favorite things to do when riding is to find a nice smooth, wet sandbar near the shores of the South Saskatchewan river. With my Renegade I was able to do the most incredibly exhilarating powerslides on those sandbars, but the XMR would dig it's outside tires in hard and lift the inside front tire right off the sand. The rear would not break loose at all and I nearly rolled it a couple times while trying.

The long chassis is supposedly better for going through much but I don't have any way to confirm that, there didn't appear to be any mud hole that I could get through that my short wheelbase buddies were not. Another bonus of the longer chassis is the ability to add a passenger seat and make it a 2up machine. I did this with the hopes of being able to take my wife and kids on the back but in reality it only happened a couple of times.

In conclusion I would say the XMR is a great ATV and I wouldn't hesitate to recommend it to any mud rider or casual mud rider. I will be selling it this spring as I have recently purchased a 2012 Outlander 800XT which will be my first G2 Can Am and my return to a short wheelbase. Look for a review on it in the coming months.
Posted by Trail Rider at 10:23 AM