Whats up? Isn't this the "Sask" Trail Riders blog? Isn't the Iron Horse Trail an Alberta trail System? Yes it is, and no I haven't become jumped ship. The reason I am writing about the Iron Horse Trail (herein referred to as IHT) is because I wanted to experience what a provincially funded, maintained trail system is like, and we don't have anything like it here in Saskatchewan. It is by far the closest maintained ATV trail system, only 363kms from Saskatoon. The majority of which is on double highway.

So what is the IHT? It is an old railway line that was abandon and turned into a multi-use trail. You are welcome to use almost anything on the trail other than cars\trucks. The promotional videos show people walking, biking, snowmobiling, riding horse and of course riding ATV's. The trail system receives funding from the government, tourism and from the proceeds of ATV license plates which are mandatory in Alberta.

With these proceeds the trail system is maintained, meaning that the trails have been graveled and that if washouts occur they will be repaired. The longest leg of the trail runs from Heinsburg to Waskatenau, a total of 177kms. There is another leg of the trail that runs North East from the Abilene junction to Cold Lake which can ad another 98kms to your trip if length is what you are looking for.

One of the first things people ask me about the trail is if it is boring? I likely get this question a lot because many of the ATVers I hang around with are hardcore mudders. I am not so sure how to answer that question. It is a very different experience. The trail is an old rail system, so it is pretty level. The trails are covered with gravel, so that even when it gets wet it isn't too mucky. In many ways it is like driving on a gravel road. And there are some part of the trail that are straight trail for kilometers at a time which can get pretty boring. But that is not really the point of the IHT.

So what is the point then? It is about getting onto a trail, with your ATV, away from cars and other traffic. Getting into the heart of nature and seeing some amazing sights along the way. It is about using your ATV as a mode of transportation to get you to where you are going rather than your car. It's about being where the local culture not only accepts ATV use, but encourages it due to the tourism dollars it brings to the communities. There are many trails off of the IHT, and if you search hard enough you may find a couple mud holes but they will be few and far between. Keep in mind leaving the trail is discouraged because the land adjacent to the trail is privately owned. So, if you are a hardcore mudder and that what you are looking for you will likely be bored.

I chose the IHT because I was looking for a getaway for 3 of my close friends, my son and myself. We wanted to explore and have a bit of an adventure. So we rented a tandem ATV trailer (pictured behind us) loaded all our gear into it and set off from Heisburg to start exploring.

I found that one of the most difficult parts of planning this trip was trying to figure out how much distance you can cover on ATVs when you don't know what speed you will be able to travel and what the terrain will be like. We decided that we would camp in St Paul, so we would need to travel 65kms from Heinsburg. We needed to allow time to get there and set up camp which was easily accomplished.

Some of my favorite parts of the trip

This area was gorgeous. We had the river to our left and huge green rolling hills on our right. Absolutely one of the most scenic areas of the trail

I didn't get any pictures of this part of the trail because it was just too much fun. The trail was a little but wider in this area, so I cracked open the throttle an let the ponies out. Again this area was very beautiful, the deep forest green to either side of the trail blocked the sun and provided some much needed shade from the heat of the day. There were a couple areas of the trail that had been built up for the rail line and had 20-30ft drop offs on either side. A nice little bonus along this section of the trail was a very large gravel pit just East of Elk Point. I imagine that they get much of the gravel they use on the trails. There were large signs saying "do not leave the trail" and "keep out" but the boys in us got the best of us. If you do explore this area, do it with extreme caution and at your own risk as it is not a safe area.

Elk Point was the first larger town we encountered. We pulled in, got gas. Beside the rest stop was a car wash where I was able to spray out my mud plugged radiator from a previous ride. There was also a Pizza Hut and other fast food restaurants nearby.

This leg in my opinion was the most gorgeous, even though we had already seen some beautiful areas. As soon as you leave Elk Point you are in the middle of the woods again and eventually down into a valley. This valley had the most gorgeous green rolling hills to either side, sloughs with beavers and again some much needed shade from the sun. 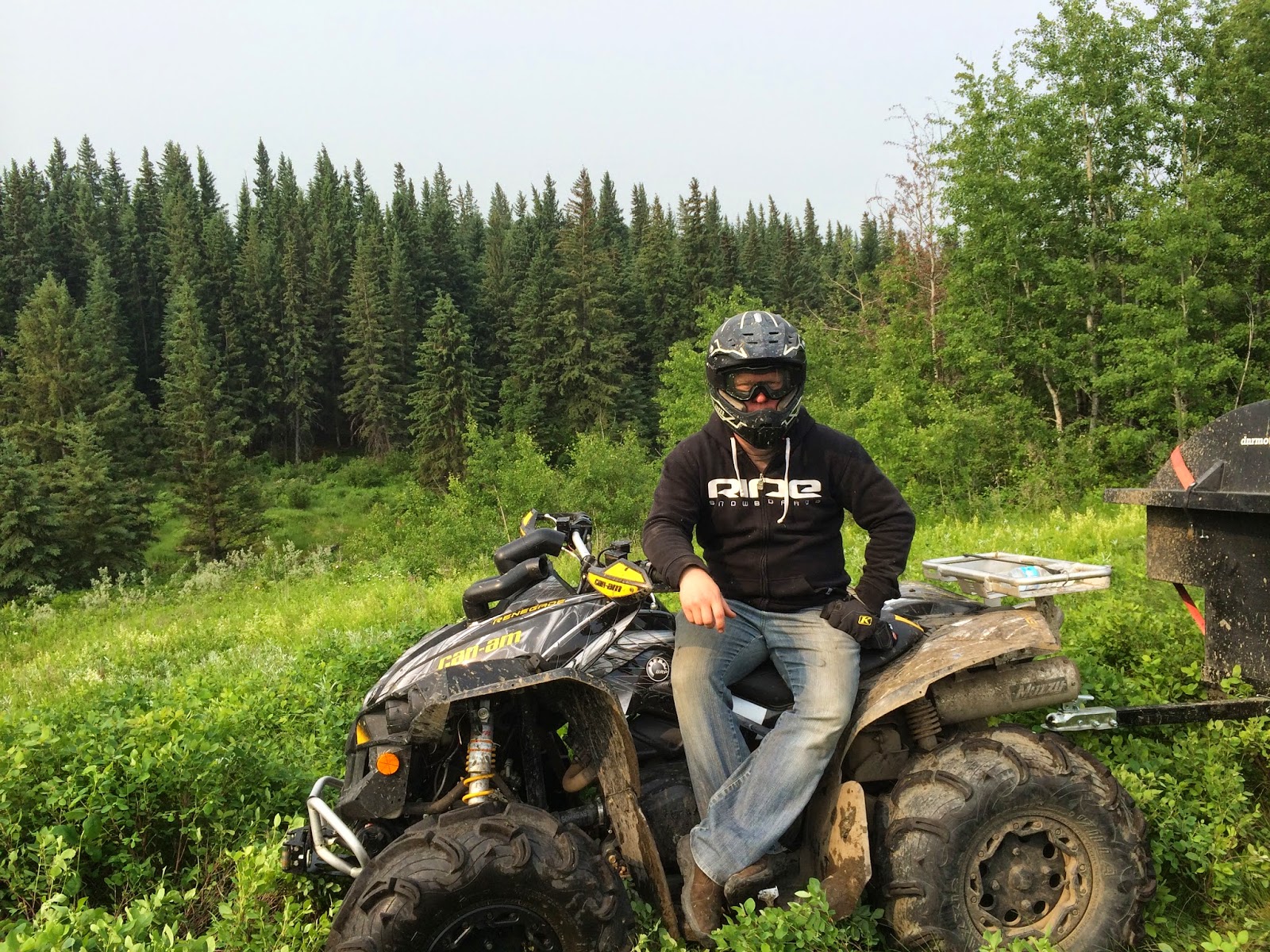 We were surprised at how large a city St Paul was being that we were not familiar with the area. We expected a small sleepy town but were greeted by a metropolis complete with traffic and large stores and even a movie theater. We got ourselves a map and found our campground, which was on the other side of town from where we entered and a fair distance off the trail. Stranger yet, we had to ride on paved residential streets to get there.


We found our campground which was directly beside the RCMP regional detachment.

This was not the rustic experience we expected.

For the most part we felt that our ATVs were welcome in the town, but we did get the evil eyes from some. It was a unique experience to be able to ride on the streets in the towns. 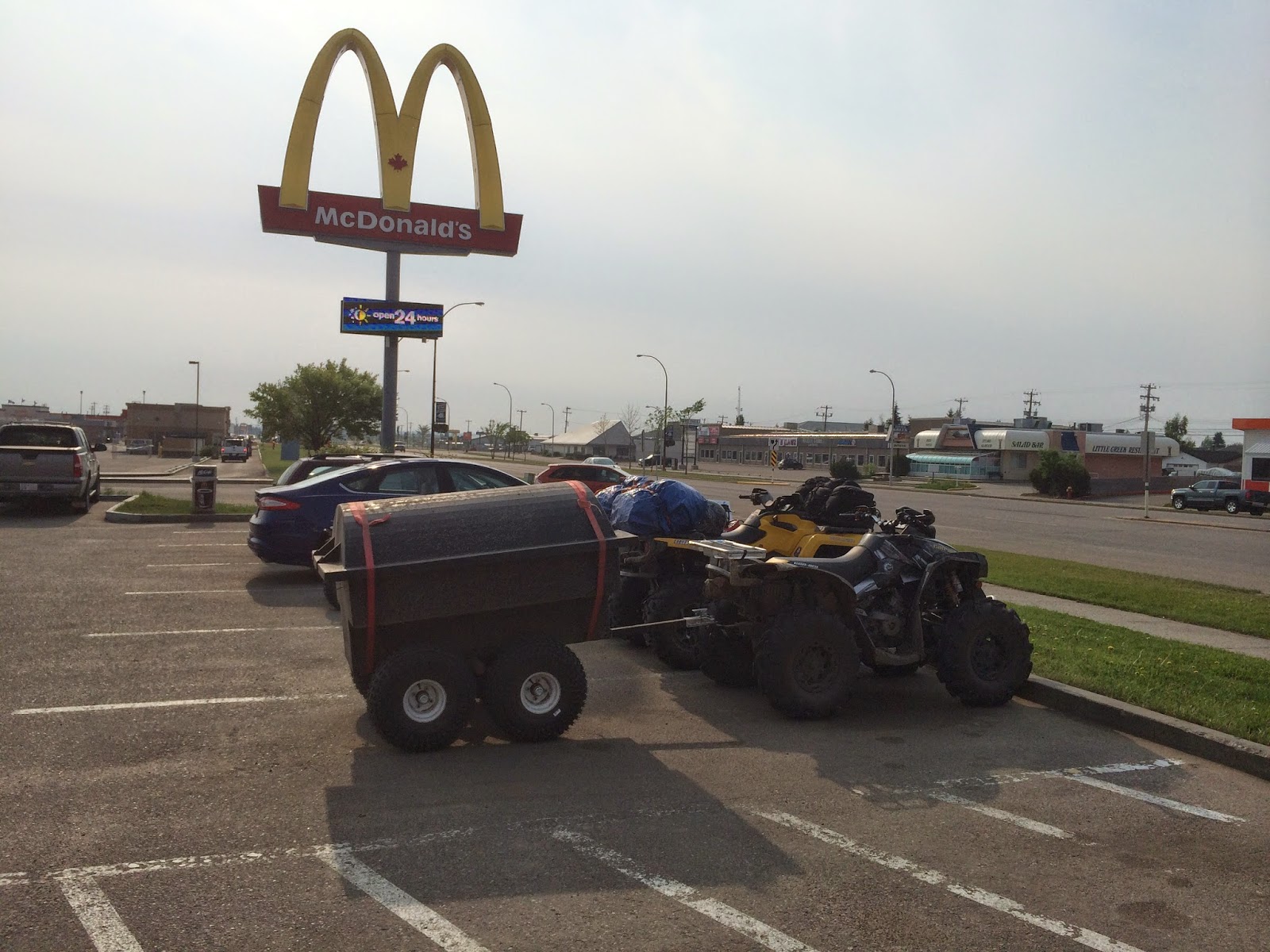 The Trails beyond St Paul

The scenic trails seemed to end at this point. With an entire day to explore the area, we left our trailer at our campsite and were able to significantly pick up our pace. Unfortunately we didn't find that much to explore. As we headed West out of town the trail got very straight and rather than being engulfed in trees and forest we had relatively flat farm land to either side.


We took the east leg of the junction and headed towards Mallaig, Glendon and Bonnyville

We continued east and made it as far as Bonnyville, and in retrospect I wish we had pushed further up to Cold Lake to see the Beaver Trestle Bridge. But when we saw the terrain wasn't getting any more exciting we decided to head back to the Abilene junction and head west. We stopped for a hotdog roast in Ashmont and shortly after encountered some minor mechanical issues. We may have pushed further but the terrain was still dull and pending mechanical issues didn't give us enough incentive to push further, so we headed back to St Paul.

We had a great time. What we wanted to accomplish on the trip, we did. Heinsburg to St Paul was gorgeous and although the trail was flat and not challenging, the surroundings made it well worth it. After St Paul not so much. It was a stark contrast between the beauty of the valley's, forest and the shade of the trees and then out in the middle the rural farm land without a speck of shade anywhere in sight. But it was an adventure and I do not at all doubt we will head back there again in the not too distant future.

It has been brought to my attention that had we pushed further west, around Bellis there is the Bellis North Natural Area. This is a sandy natural forest area that has quite a few trails and a couple lakes. Looks like some good riding here. I would like to visit this area on our next trip.

Had we pushed on North East towards Cold Lake we would have been able to see the burnt remnants of the Beaver River Trestle Bridge. This gorgeous piece of history was burned in 2012 by arsonists. Before the fire you were able to cross the bridge by ATV. Currently the Riverland Recreational Trail Society and the Municipal District of Bonnyville are trying to raise money to rebuild the bridge. 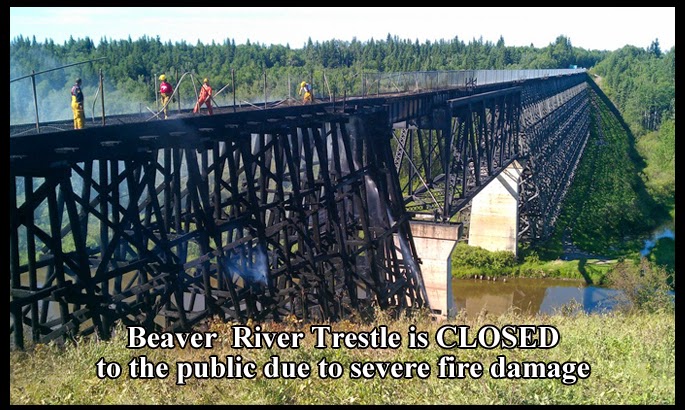 If you would like to see our route, click on the link below to view it on EveryTrail.com 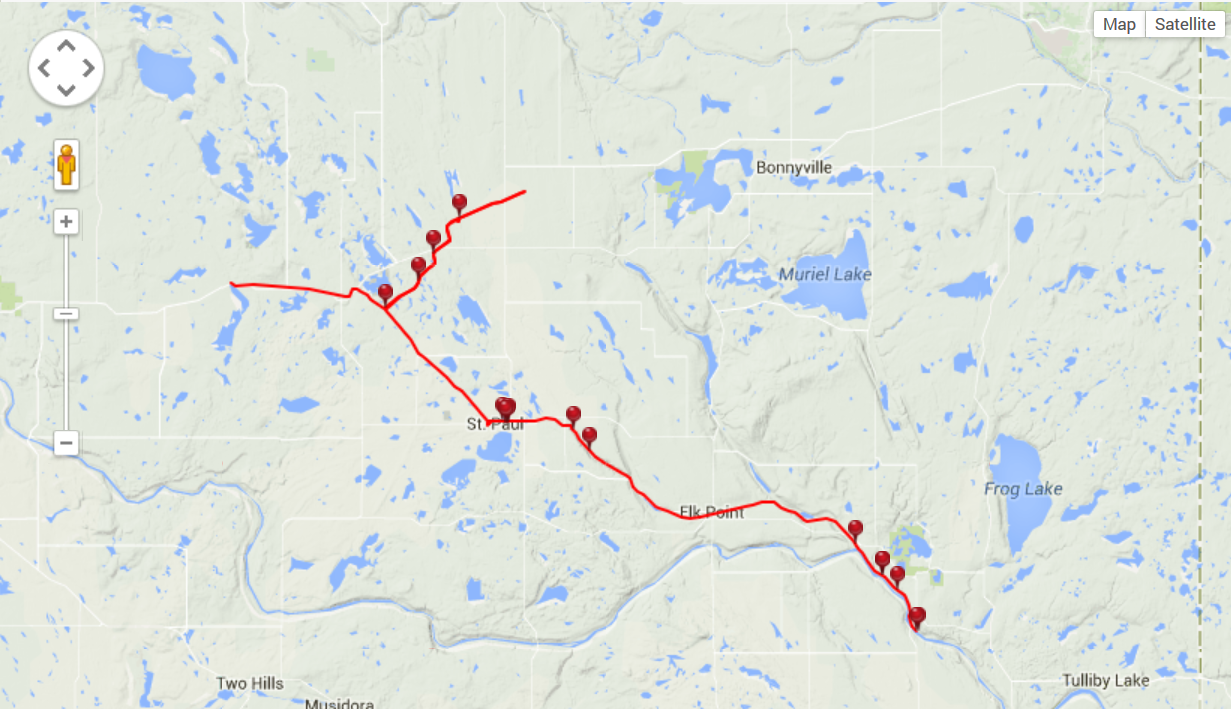