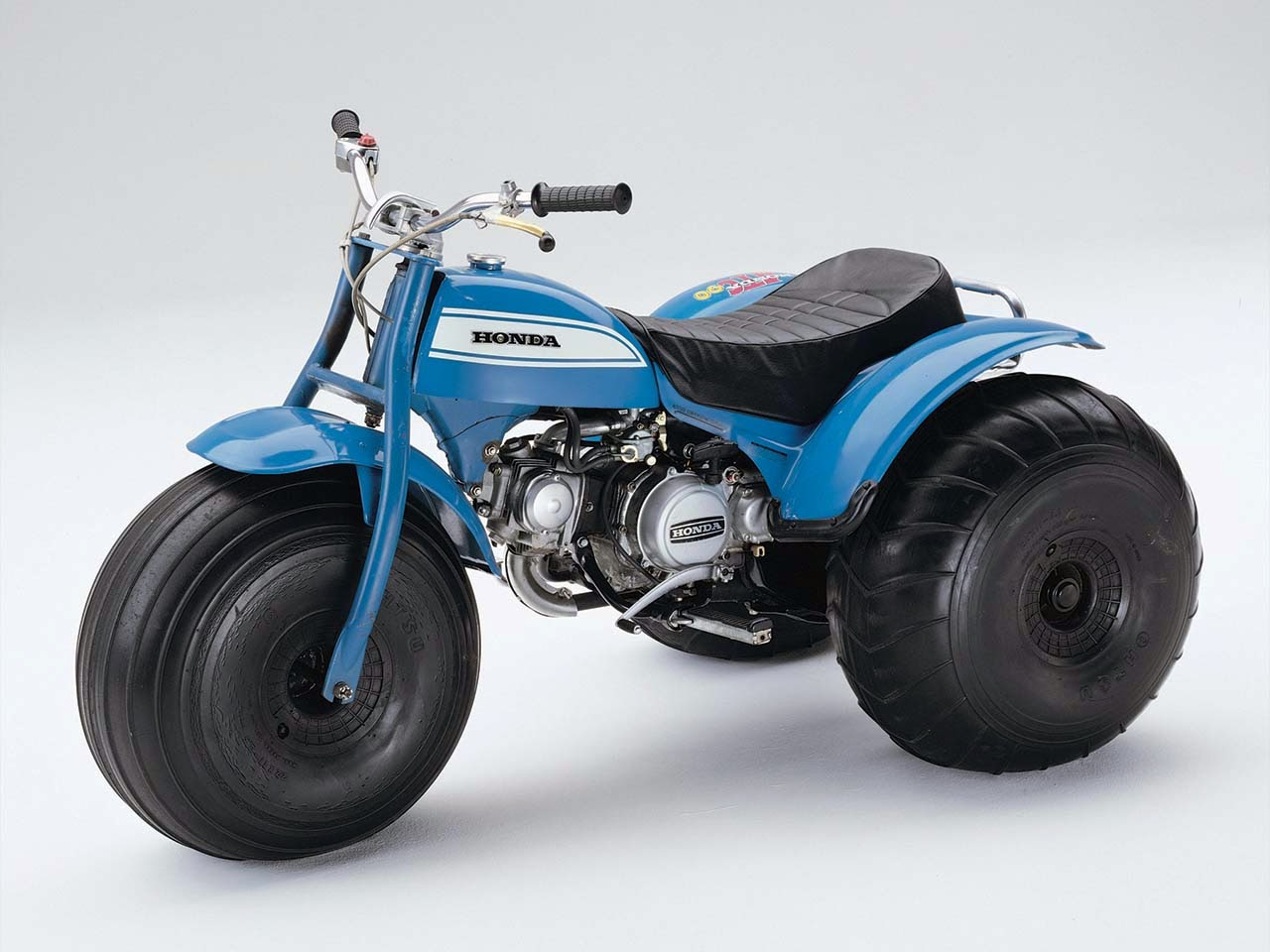 Before we had four wheels, we had three. The first mass produced ATV was a three wheeler, it was called the Honda US90. Honda did very well with the US90, before it's introduction offroading was limited to dirt bikes. But with a three wheeler, riders had a new level of stability in loose terrain and you could ride rain or shine.

Honda officially introduced the trike to America in 1970, at a price of $595. The original US90 was based on an 89cc single cylinder engine that sent its 7 horsepower through a dual-range four-speed gearbox with automatic clutch. A big feature of this machine was called Swivel-Lok, which allowed for quick handlebar removal for easy loading in a trunk of a car or a station wagon (remember this was the 70's). Later that year the US90 was renamed the ATC90 when Honda trademarked the ATC (All Terrain Cycle) name, and three models carried that Honda ATC monogram through the 1970s. The ATC70 gave younger riders a scaled-down version of the fat-tire experience. And by the end of the decade, requests for more power turned the original ATC90 into the ATC110 in 1979. The ATC was as evolutionary as it was revolutionary from the beginning. 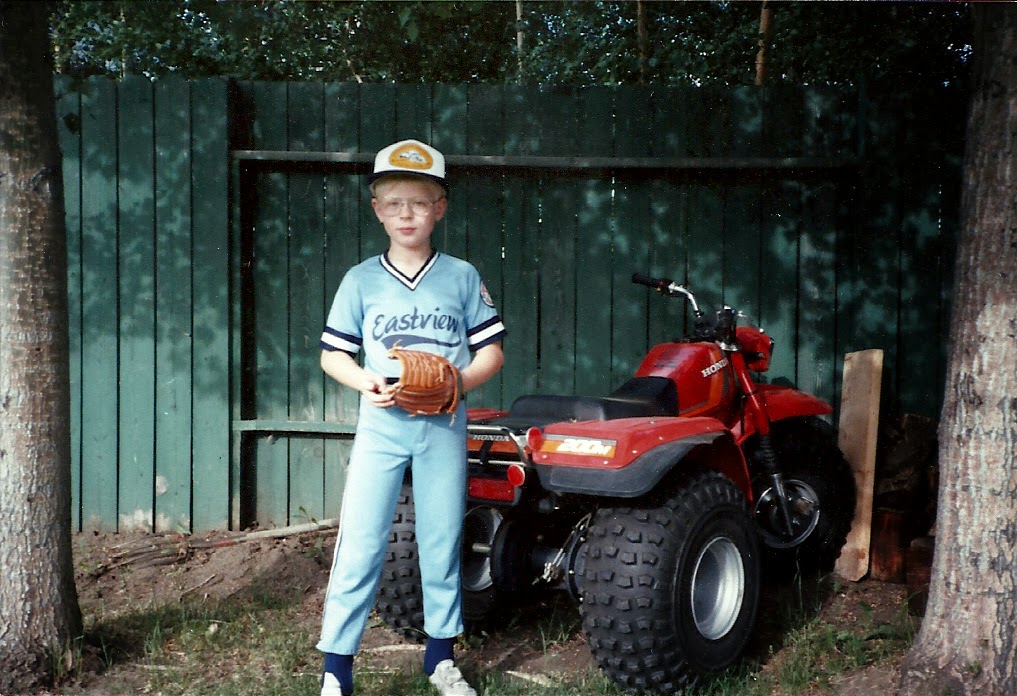 I personally have a lot of history with three wheelers, and so I have a soft spot for them. When I was a kid I had a fear of loud noises,  engines in particular. This concerned my Dad, so he decided to buy an ATV hoping it would help me overcome my fear. He thought a three wheeler would be good because I would be able to ride it by myself without having to worry about being tall enough to touch the ground. And one day he brought home a brand new 1984 Honda 200M ATC on the back of our truck.

It worked! I was no longer afraid of engine noises. My Dad and I would go riding a couple times a year at the Ottopasso Trails South of Saskatoon, which at the time was still a public facility and run by the province. We would also bring it to my cousin's farm when we went to visit them. I loved the freedom the trike gave me, anytime I was bored I could hop on my machine and go explore. Most of my memories are good, but there were a couple accidents. One of the incidents happened shortly after we got the 200M. My Dad and I were riding around the Beaver Creek Conservation Area just south of Saskatoon, I was just a little guy and was riding in between my Dad's legs. Neither of us were wearing a helmet. My Dad attempted to go down a steep hill at an angle, but three wheelers don't do well with angles unless you can hang body off the side as a counter weight. Needless to say we rolled, tumbled all the way down the hill. In the carnage I ended up hitting my head on something, I can remember touching the back of my head afterwards and having a lot of blood on my hand. It was scary at the time, but the blood dried and I had a way cool battle wound to show my Mom and friends when I got home.

Riding changed for me when I was 10. I met a guy that lived near me, who would eventually become my best friend. His name was Terry, and he was very passionate about riding. When he found out I had a three wheeler we were instantly friends. He had a dirt bike when we met but it wasn't too long before he sold it and got a three wheeler. My Dad introduced me to riding, but Terry is the one who ignited a passion in me for ATVing. We had a number of off road adventures together over the coming years, a couple of which involved being chased by police.

Fast forward a number of years into my early teens, I ended up selling the 200M to buy a dirtbike. Less than a year later I sold that dirtbike to buy another three wheeler. But this trike was nothing like the last, it was like the 200M on steroids, enter the 1983 Honda 250R ATC.

The 250R was psycho. If a regular three wheeler was dangerous then this was an absolute suicide machine. It had all of the instability of the three wheeler with almost twice the power and a very torquey 2 stroke engine. You could wheelie the 200M if you really tried, but with the 250R you had to do everything in your power to keep the front wheel on the ground. We bought it in 1992 used from Redline Harley Davidson in Saskatoon. The engine blew shortly after we got it and so Redline rebuilt the engine for us under warranty which increased the power even more. I can remember riding across a stubble field at approximately 80kmph and if I kept it in the power band it would effortlessly raise the front tire off the ground. Low profile tires were becoming quite common at the time and they would have dramatically increased the stability but I was still riding on balloon tires. I semi-jokingly say that I believe this machine tried to kill me as there were a number of incidents that I shouldn't have been able to walk away from, but I had angels watching over me and I never did sustain any serious injury.


A couple of years ago I purchased an 84 Big Red to relive some of the memories from when I was a kid. Found a gorgeous machine on Kijiji, very similar to our 200M. On one of my first rides I got a little over confident. I was bombing along a trail beautiful sandy trail in Northern Saskatchewan getting some good speed when I came up to a curve to the right. As I entered the corner I realized I was going  too fast for the for the traction conditions. I tried to break the rear end loose in order to keep it flat and slide the rear end around the curve but the knobby tires bit into the sand and held firm. Before I knew it my inside tire was coming up and I was in trouble. At that moment you have two choices, turn out of the curve and into the bush or roll. I decided the first would be a better option and I plowed into the bush. Thankfully there were no large trees and the brush just slowed me down. It was a good reminder how a small miscalculation can turn into a wreck. Yes I wasn't being careful but this kind of situation just doesn't happen on a four wheeler.

Are three wheelers dangerous? Absolutely yes! A novice rider can get onto a quad and learn to ride it in a relatively short time and become proficient (knowing how to predict what the machine will do in a particular situation) at riding within a couple of months. Because of the reduced stability of the ATC that same proficiency takes at least twice as long.

In conclusion, I will always love three wheelers, and I don't plan to ever sell my Big Red. But they are different, and ultimately more dangerous than a four wheeler. Some want them banned all together and I will never go that far but they need to be treated with even more respect than your average ATV.
Posted by Trail Rider at 8:47 AM