As I was doing online searching for Saskatchewan ATV trails a product called "Backroad GPS Maps" kept popping up. My brother in-law had mentioned that a friend of his had some kind of different map for his Garmin handheld GPS, and that he was amazed at how it helped them to find some old abandon trails when they were hunting in Northern Saskatchewan. I wasn't sure if this was what he was using but the manufacturer Backroad Mapbooks does mention that they have ATV trails included with their maps. At a cost of $99 it was too expensive to risk purchasing a product if it didn't have what I was looking for. A while later, as I was browsing at Wholesale Sports I saw the Backroad GPS Maps case on the counter. I asked the sales person if it was returnable if I couldn't find a decent amount of ATV trails on it. Most software is not returnable and I figured this would be the case here too. None of the salesmen knew so I eventually talked to the manager who didn't know either, so he called other stores to ask them if they knew if it was returnable. He couldn't get a straight answer as it seemed like none of the other stores ever had someone try and return it. So as a good manager he gave me his business card and wrote a note on the back saying he would allow me to return it. So with no risk I slapped down the credit card and told them to "Charge it!".
This product allows you to use it two ways, one is on an SD card that fits into your handheld GPS, the other is a downloadable version you can use on your computer. I do not have a handheld GPS that can accept an SD card, and I wanted a nice big screen to be able to see the entire map so the downloadable version was the way for me.
Backroad Mapbooks is somehow partnered with Garmin, and they use their computer software called BaseCamp to display the map. 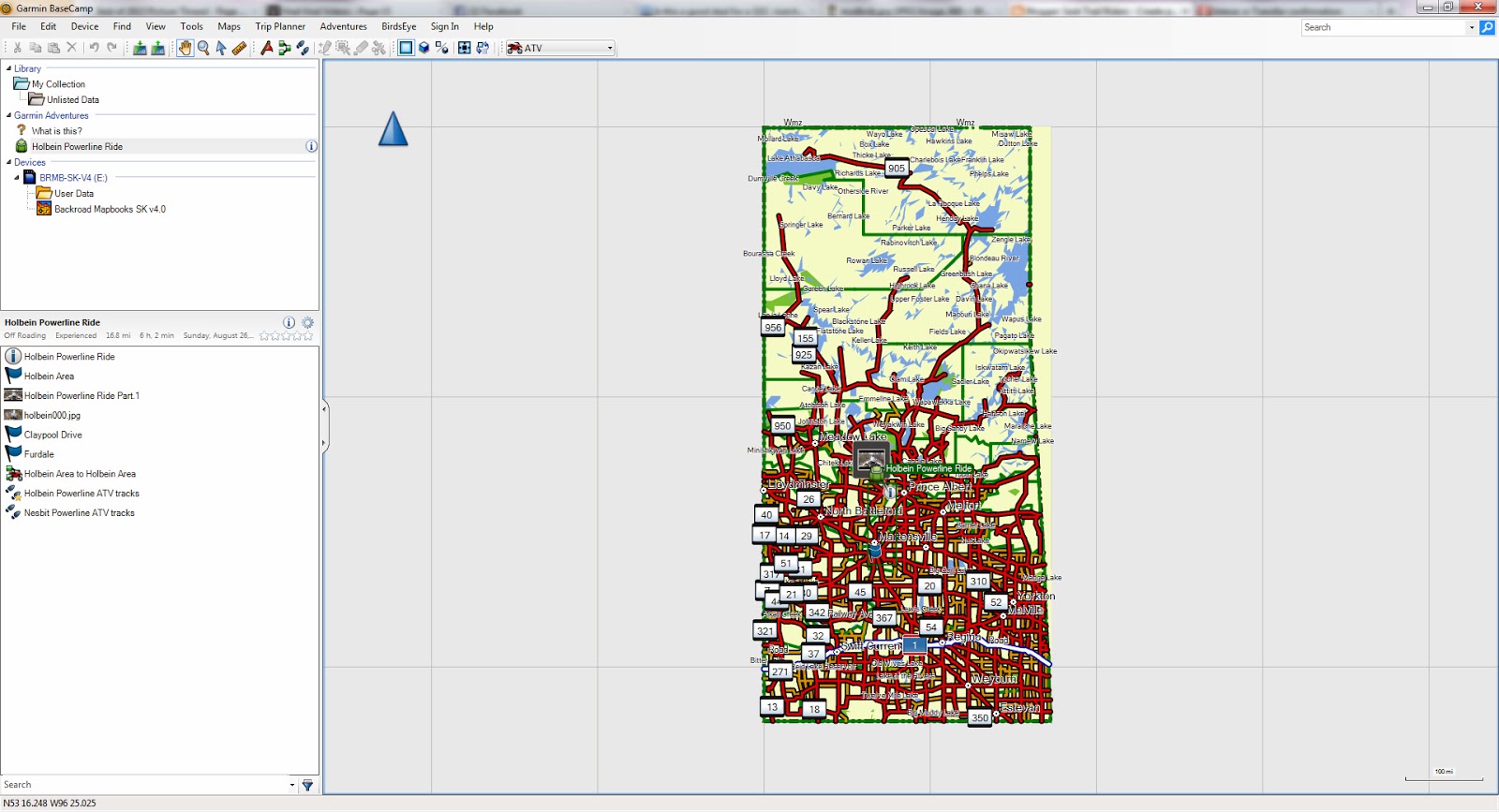 After installing, I started exploring. I started in areas where I have rode trails and knew they existed. I was disappointed to see that most were not on the map. "Good thing I can return the product" I told myself. But as I spend more time with the product doing more exploring I started finding trails. Not tons, but enough that I started getting excited.
I need to mention that the product support was amazing! I had no problems loading the software onto my home PC, but I also wanted it on my work PC and my Macbook. All of which I could do because they will let you install it on as many computers as you like, PC or Mac.Backroad Mapbooks tech support guy helped me with getting the other two computers and working perfect.
Since they were so helpful with getting the product installed I decided to call tech support again and ask if they could help me find ATV trails, he recommended putting the SD card in the computer while I did a BaseCamp search for "ATV". Apparently when the SD card is in the computer that the computer will access a database that only exists on it. And he was right!
I was delighted to see that my search turned up 50 different trails all across Saskatchewan. Not all of which were actually ATV trails (such as the Meewasin trails along the river bank here in Saskatoon) but many that were. Also, if you put a flag where you are currently located it will sort your search results by the trails nearest to you. 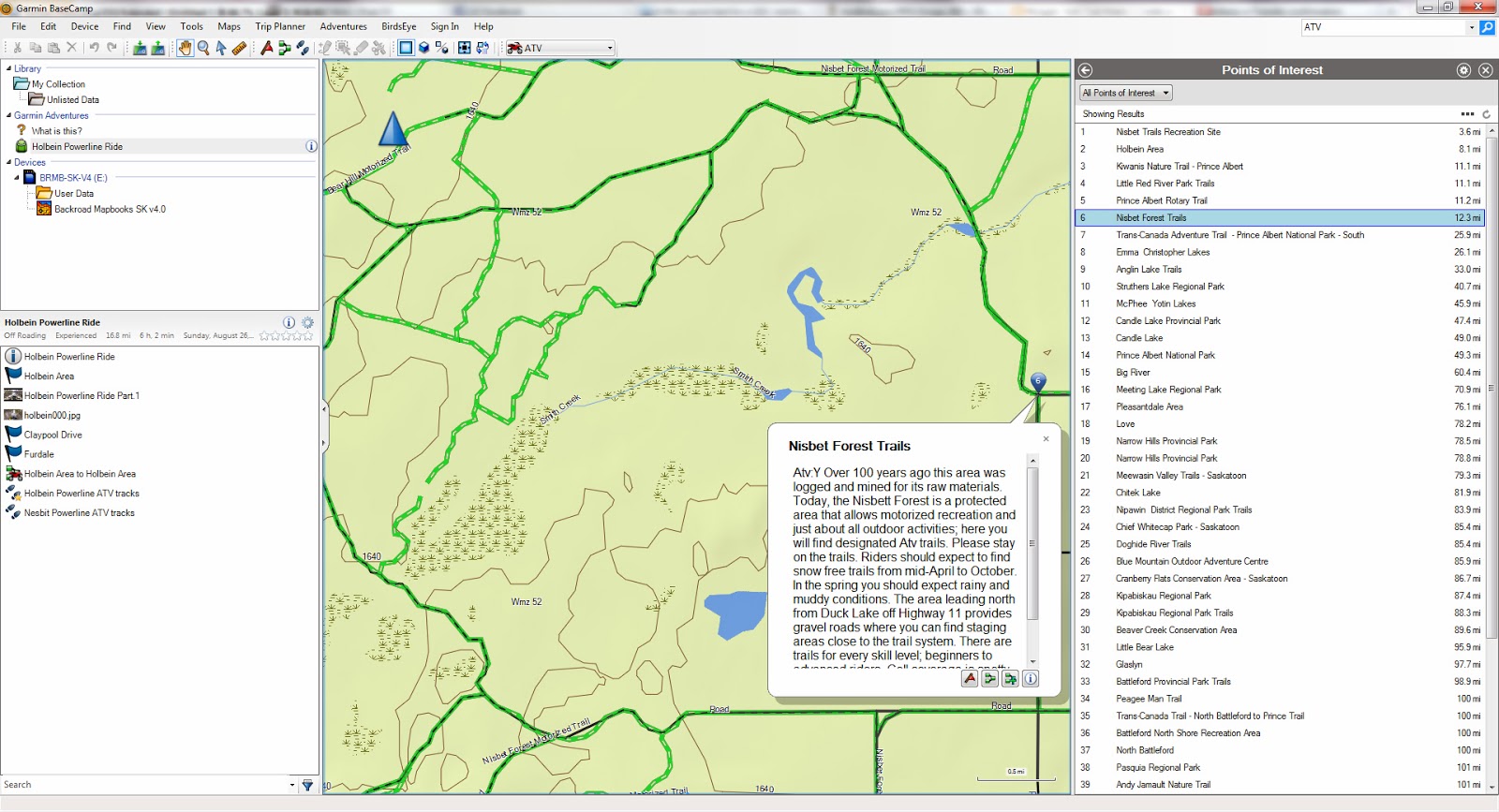 In this picture of the Nisbet forest area, trails are marked in green are considered multi-use trails.

Overall I am pretty happy with the product, but I won't know how good it actually is until riding season when I will be able to see how many of these trails actually exist.
Even though I could take the software back to the store and I would still have access to all of the software I have downloaded (and my $99) I think I am going to keep it as it looks like it will help in the exploration of our Saskatchewan trails.