As there is a huge market for used ATV's I plan to start doing reviews on some of the machines I either own or am able to ride. This will be the first.

We purchased this machine October of 2012. At the time of purchase it had 7000kms on it. We paid $2200 for it and figured that was a good price for a 4x4 ATV. We needed an ATV for our business that we could attach a snow blower to. This was a bit of an experiment because we didn't know how well this concept was going to work so price was one of the main factors for us. 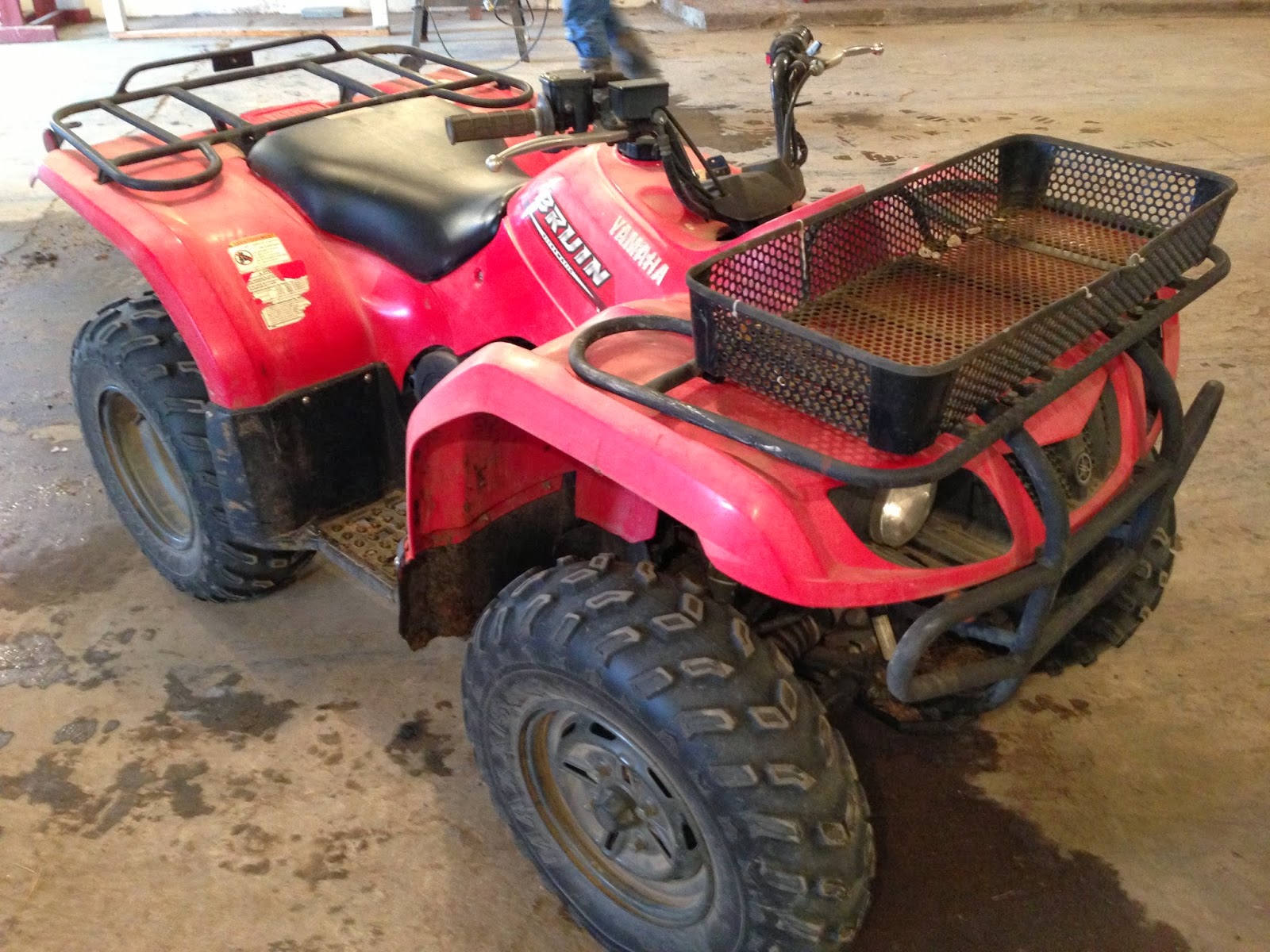 When I first saw the machine, it presented itself reasonably well, the previous owner had just replaced the torn seat with a new cover and it was clean. The red plastics were more a shade of pink from sun fading but this was a work machine and seemed to fit the bill for our needs.

The Bruin engine is a 350cc air cooled unit attached to a CVT (automatic) transmission. It is worth noting that this engine has been made by Yamaha since at least 1987, probably longer which likely accounts for the reliability of it. No EFI here, just a carburetor. Push button four wheel drive, but no “low” gear on the gear box and no locking front differential. It has decent front and rear racks and a comfortable riding position. Front disk brakes and a single rear drum mounted to a solid axle.

There isn't much that really stands out on this machine, and it looks very dull compared to many other machines out there. But….I really like it.

It has performed nearly flawlessly during our time with it, it ran like a charm all throughout the winter, starting in -45 degree weather and doing everything it was asked to do. Once the weather was nice the snowblower came off and it became a recreational machine for the months that the weather was nice. My daughter took her first solo ATV ride on it, my 74 year old Dad rode it a couple times on our adventures to Nisbet Forest. And when we took it to family camp, it was the machine we would ride around the grounds.
It doesn't do anything spectacular, but it does everything well. Shortly after we purchased this machine for our company I personally bought a 2007 Can Am Renegade 800, which was my first 4x4 machine after riding 2wd sport quads for most of my life. The Renegade is spectacular in so many ways; looks, performance and power. But when it broke down, or was too loud to bring where we were going, there was the Bruin. 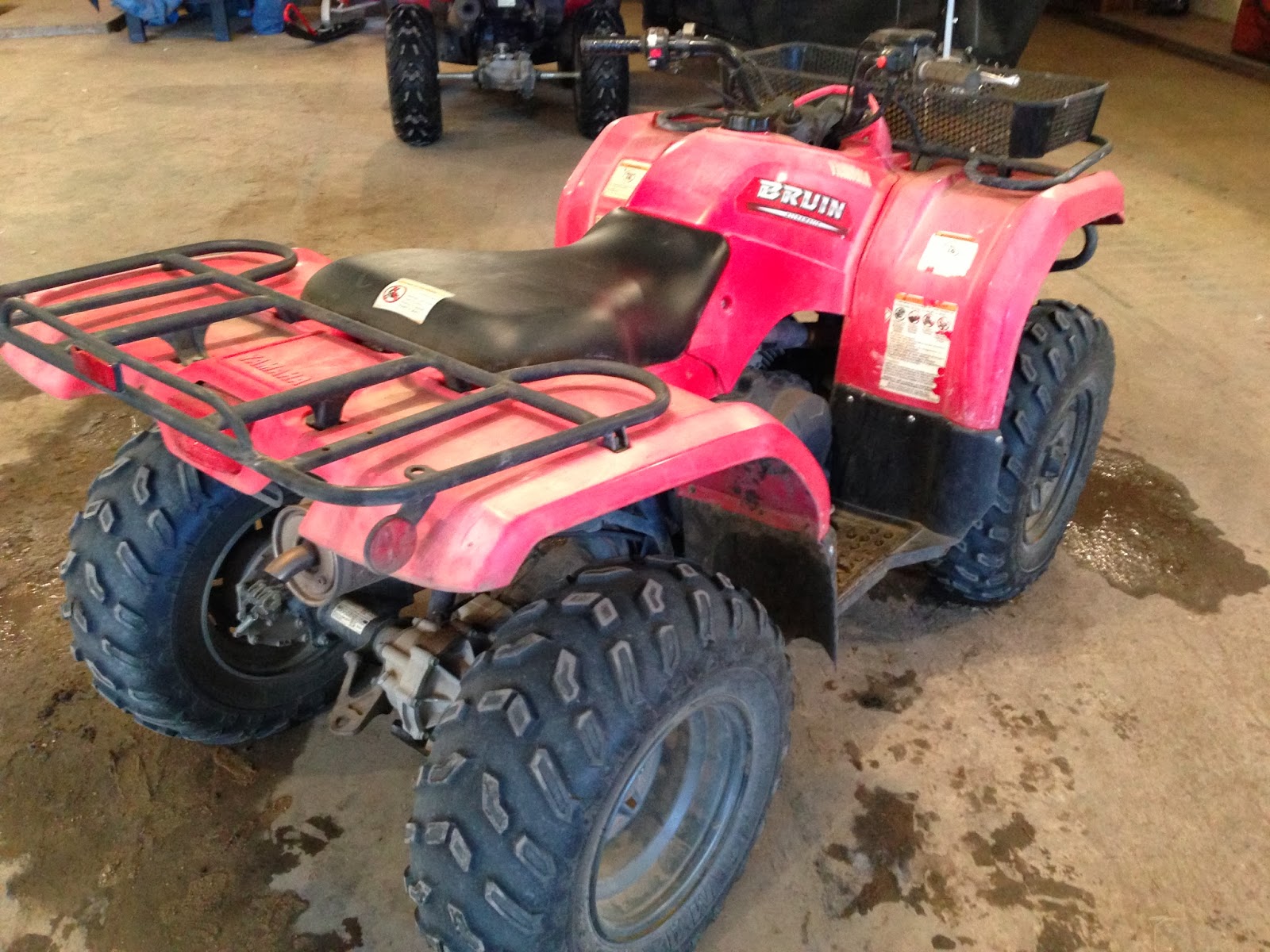 I had to sell the Renegade last fall, even though it had less Km’s than the Bruin (6000kms) it had a number of pending issues that were going to cost big dollars to fix. While I was looking for a new machine a friend invited me on a ride. I didn't have my big 4x4 machine but I had the Bruin, so I brought it. I cannot believe the amount of fun I had on that ride. I think that sometimes we get locked into thinking we need all the bells and whistles to have fun when riding, but the Bruin breaks that mold. Sometimes simple is still fun. Both my friend and his buddy that accompanied us were surprised at what this little machine was able to do compared to their 700 and 750 machines. It did have a hard time trying to winch the other guys out of the mud but it never got stuck itself, both of which can be attributed to its light weight. And I was easily able to keep up with the other guys on the trails. It's no powerhouse but it does move it's light weight chassis reasonably well and can even hit speed of over 70kph.

All in all I think this is a great machine. It reminds me of my 1984 Big Red ATC, dependable and ready to do what you ask it to, just not flashy. If you are looking to buy one, I would recommend it. 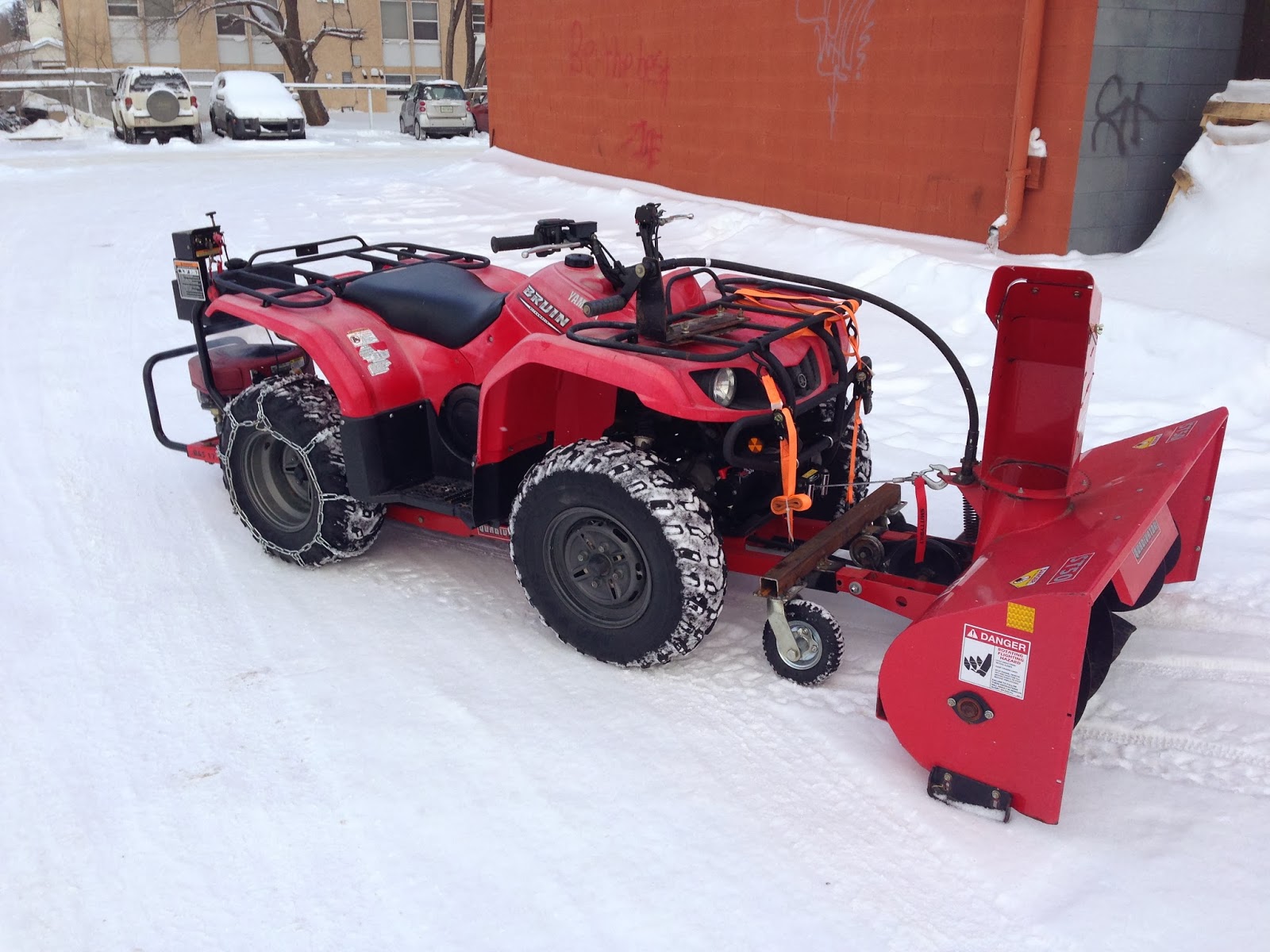 Our first revision of the snowblower, this one was manufactured by Quadivator. Didn't work for our requirements. 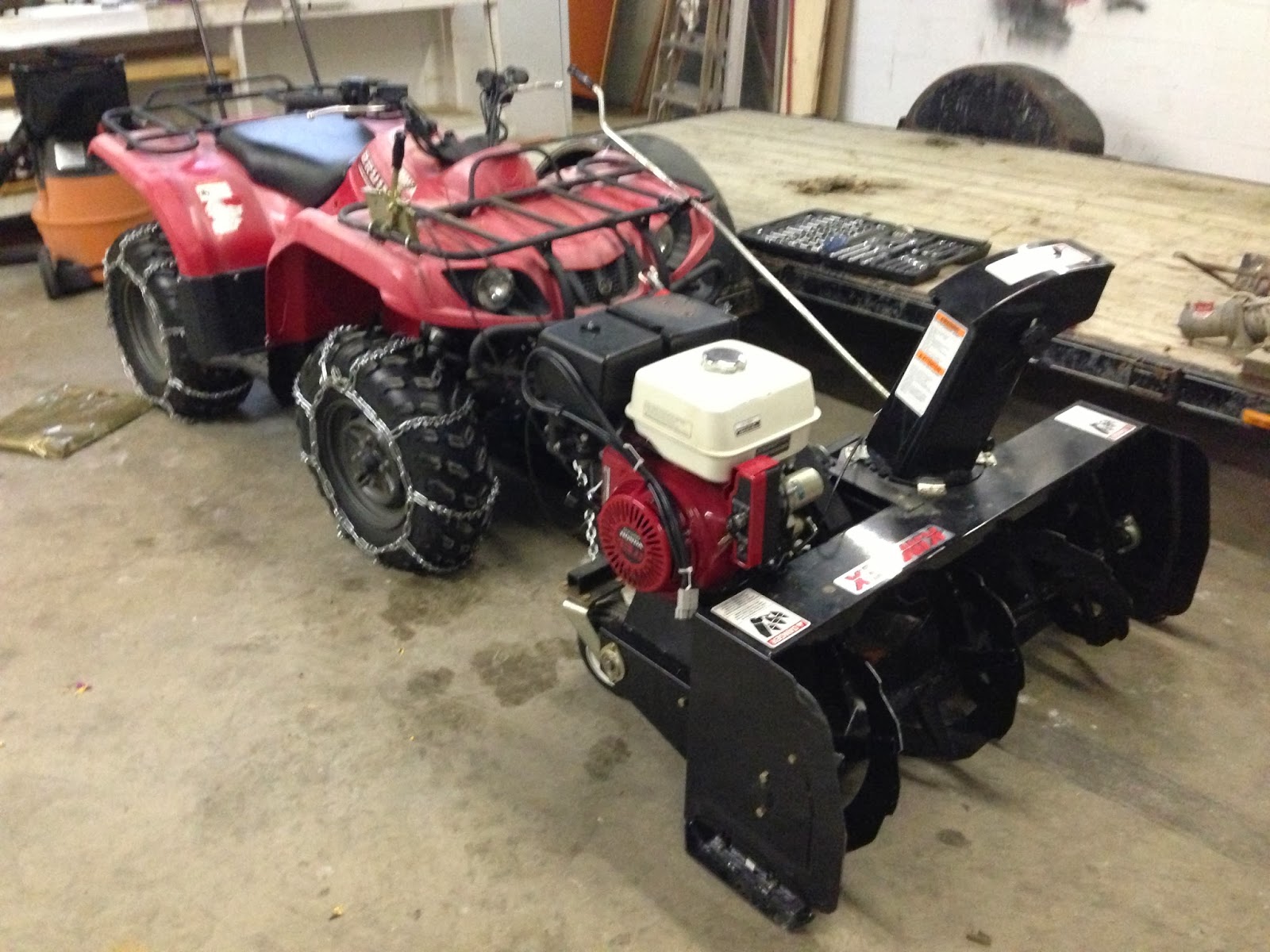 This is our second and current revision of the snowblower other than the motorized controls for the chute added this year. It is made by Kimpex and works much better for our application. 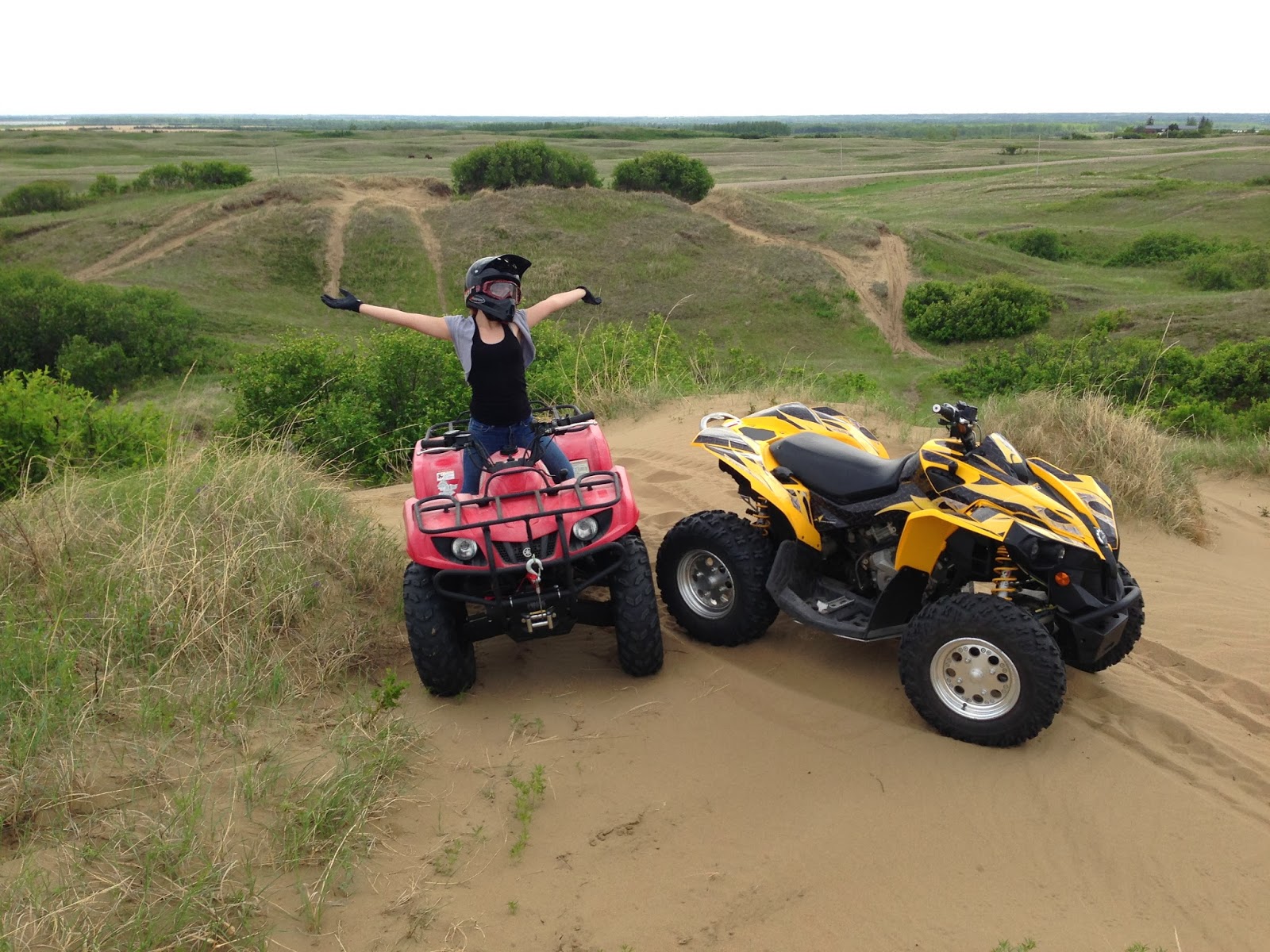 My daughters first quad ride with her Dad at the Ottopasso Trails on the Bruin. My 2007 Can Am Renegade 800. 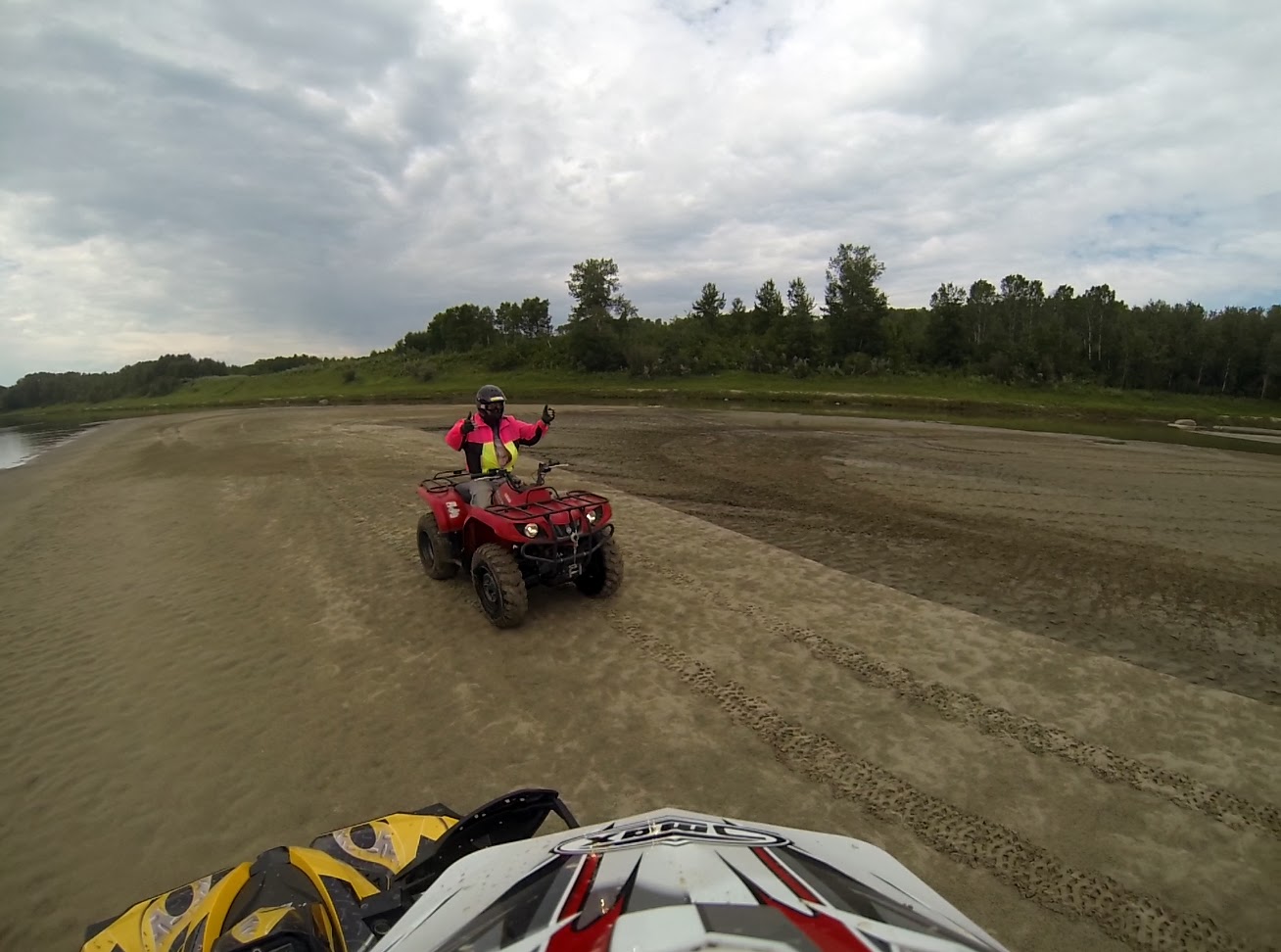 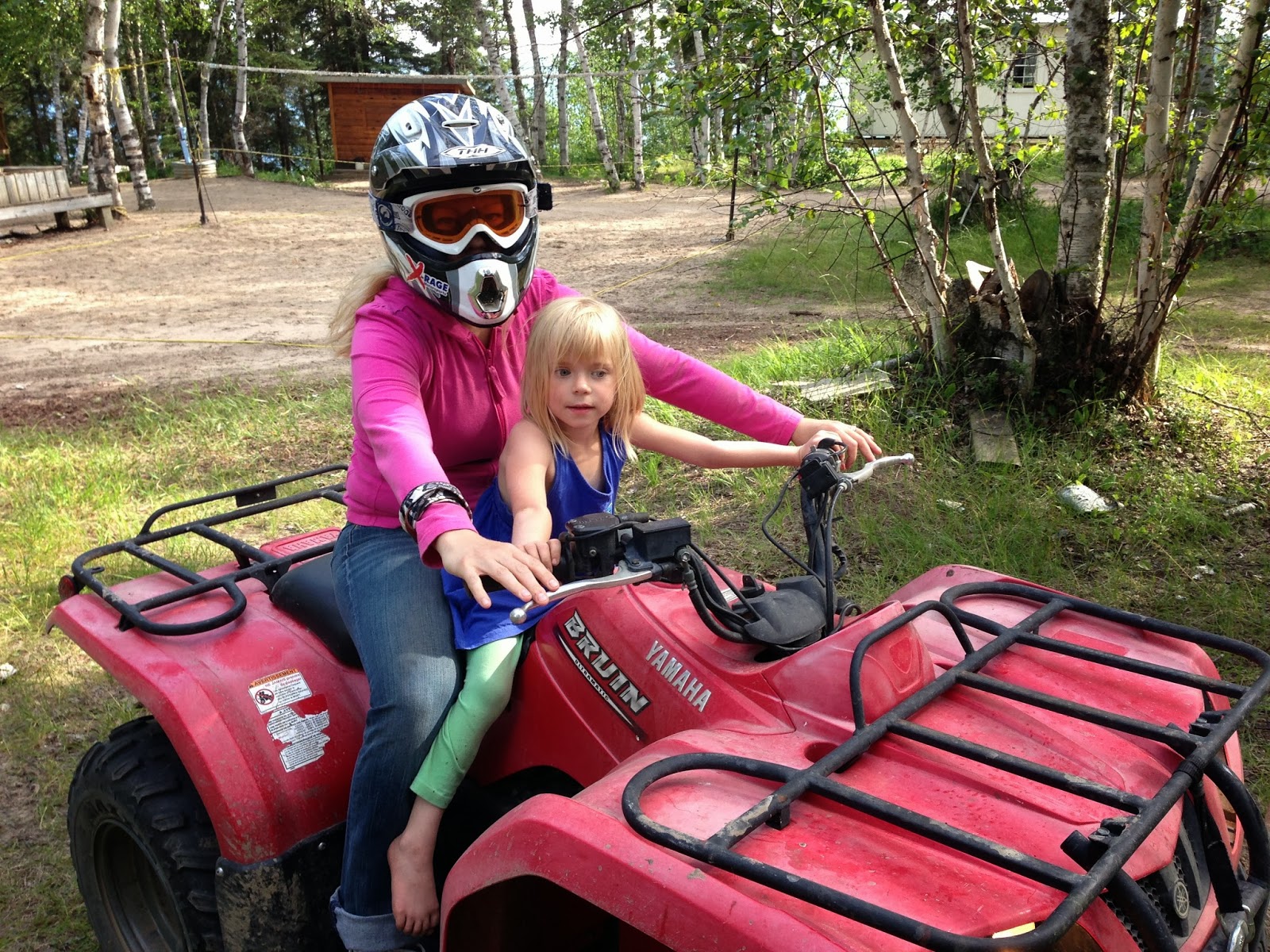 My wife and daughter at family camp

Update April 23, 2015
It's been over a year since the writing of this article and the Bruin continues to work well. It will no longer be used for snowblowing duty as it has been replaced by a 2008 Rhino 700 and will be used strictly for recreation.
It has been great for recreational riding this last year with only minor issues. It blew a belt while trail riding and had to be towed back to the trucks. We now carry a spare belt with the machine.
The brakes are bad, I never mentioned how poor the brakes were in the original article but they have never been great and continue to suck. The rear drum brake seal has failed so that it now fills with water and does very little to assist with braking. The front brakes don't grab well either and it is almost impossible to lock up any of the tires if you are in a panic situation.
We upgraded the tires to 25" ITP TerraCross tires at all four corners. This has increased the traction dramatically but has also left it feeling less powerful.
My son has mainly rode this machine and only recently is complaining about its lack of power and is wanting an Outlander.

Update August 25, 2015
With the purchase of the Rhino we couldn't justify keeping the Bruin around and we sold it earlier this summer. It was a great machine and I know it will be missed.
I made a YouTube video of this review which can be seen at the top.